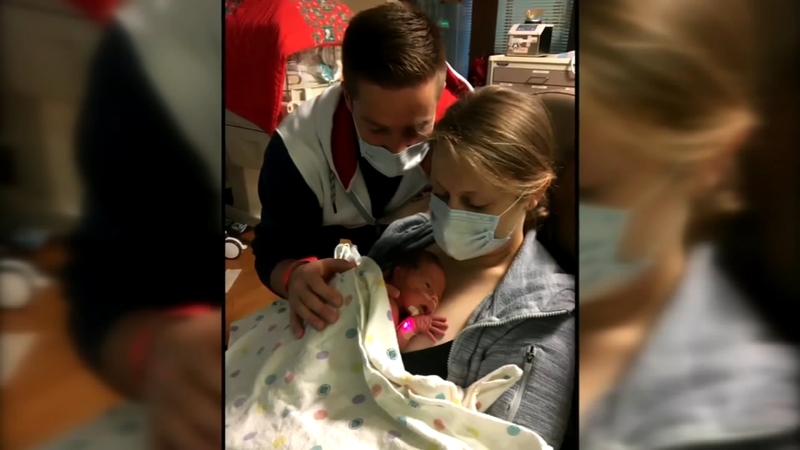 CHARLOTTE (WTVD) -- A Virginia couple brought home a little bit of North Carolina on Christmas while passing through Charlotte.

Doug and Randi Brown lived overseas for the last seven years serving in the Air Force and had just moved back to the United States and were desperate to see family in Iowa -- now that they had a baby on the way.

"We weren't sure what was going to happen, but we were sure we wouldn't be heading back to Virginia that night," Doug told ABC-affiliate WSOC.

After visiting family, the young couple was heading home to Virginia, 330 miles away from Charlotte, for Christmas when Randi's water broke about 20 minutes before they landed in Charlotte for a quick layover.

"It is absolutely safe to fly at 30 weeks pregnant, but this is an unusual thing that happened," Randi said. "Peyton had some other plans."


The couple didn't know the gender of the baby before her birth so they never settled on a full name until that fateful day.

"Seeing as how you know Charlotte has been so good to us -- the people have been so good. Everyone here has been phenomenal," Doug said. "We figured it would be fitting to have her middle name be Charlotte, so Peyton Charlotte."

With the baby coming as an early Christmas present, the Browns will be spending a little bit of extra time in North Carolina until their daughter is released from the Children's hospital.

In fact, the Browns could be here for at least another month, but Peyton has a big test on Monday that will help decide if they will transfer her to Virginia.