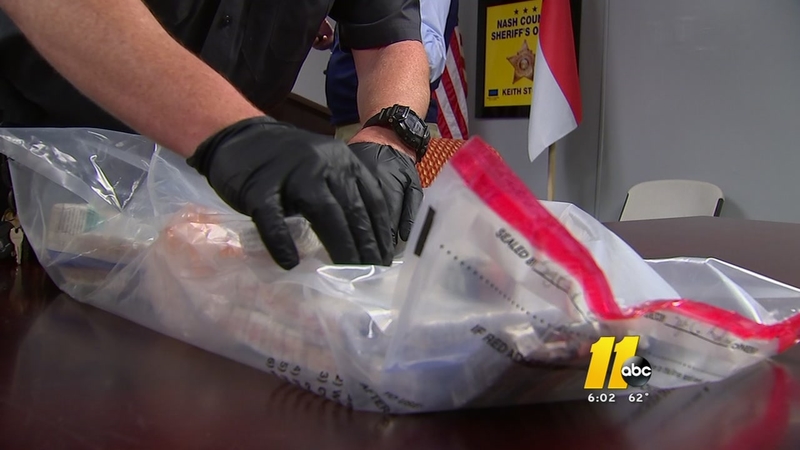 NASHVILLE, North Carolina (WTVD) -- Three major drug busts in less than a week put into sharp focus the problem of drugs passing through and filtering into North Carolina.

Special task forces with the Nash County Sheriff's Office and Iredell County Sheriff's Office took more than $5 million in methamphetamine off the street on November 15; just two days earlier, Nash deputies confiscated 6 pounds of marijuana in Rocky Mount; and the day before that, the Nash Sheriff's Tar River Regional Drug Task Force made an arrest resulting in $165,000 in heroin being taken in.

"This is a considerable seizure," said Chief Brandon Medina with the Nash County Sheriff's Office. "But what happens is, people are going to start going somewhere else to get it and then more people are going to come through our county. That's when we get the Highway Intervention Unit to get this stuff off the street."

"The only time really drugs are able to get caught a whole lot easier is when they're transporting it," said Nash County Sheriff Keith Stone.

Stone is just back from a terrorism and drug-training seminar in California. He said what surprised him most was the number of drug cartels amassed along the border: more than 200. Still, Stone said most of the drugs coming into the state are coming from the north.

"Most of our heroin trade is coming out of the northeast; New Jersey, New York, and things like that. But originally it comes across that Mexican border down there, it's transported up, then it's disseminated back down here. So, we really have two shots at them when it's up and down the roads."

Stone says it's hard to put a number on it and quantify how many drugs are pouring into the state but he said he thinks the good guys are winning.

"I think we're doing a good job with it. The way that we can tell is because the price of drugs is going up. And as the price goes up, that means we're cutting into it. And every day that we cut into one, we're saving it out of one home."

ABC11 has decided to slowly reduce the number of stories on the website that have a comments section. We believe very strongly that our audience should have an opportunity to discuss and debate events in our world, however, we have not been able to moderate the comments as well as we would like. Instead of hosting a platform that could allow a few loud and ugly voices to dominate a conversation, we want to encourage everyone to join us on our social media platforms and speak out there. Facebook: facebook.com/ABC11 Twitter: twitter.com/ABC11_WTVD
Report a correction or typo
Related topics:
nash countyncillegal drugsdrug arrestdrug busti teamnorth carolina news
Copyright © 2021 WTVD-TV. All Rights Reserved.
I-TEAM
Why you may be unintentionally paying more at the pump
Fewer deals and increased prices equal an expensive holiday season
Wake County EMS calls surge with no quick fix in sight
I-Team digs into data on pollutants in minority communities
TOP STORIES
Duke head football coach David Cutcliffe will not return next season
Vaccine inequity, hesitancy made omicron more likely: Scientists
For cop who shot Daunte Wright, will 'wrong gun' plea work?
RDU airport estimates 44,000 passengers on busiest day this week
Fire at Pilot Mountain closes state park, burns 180 acres
Morrisville man missing for more than 2 weeks found safe at home
Show More
Arbery, Rittenhouse cases spotlight self-defense and vigilantism
Streets of Southpoint reopens Saturday after shooting that injured 3
Supreme Court set to take up all-or-nothing abortion fight
Canada among latest countries reporting cases of omicron variant
Who is the real Ghislaine Maxwell: Epstein enabler or pawn?
More TOP STORIES News