Duke's Krzyzewski focused on a title, not the Tar Heels 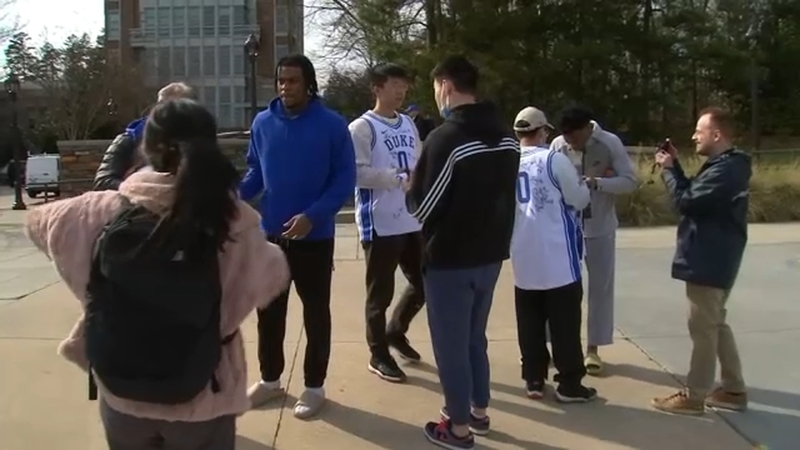 Duke's Krzyzewski focused on a title, not the Tar Heels

Throughout the storied rivalry, the two teams have never faced off in the NCAA tournament, making Saturday's game a historic first. It will also come exactly four weeks after the last time the teams met at Cameron Indoor Stadium, where UNC upset Duke 94-81, spoiling a post-game celebration honoring Krzyzewski in his final home game.

The game, which featured 80 former Blue Devils and a number of celebrities in the crowd, set the record for the most expensive ticket in college basketball history. On Saturday, the stakes will be even higher, with Krzyzewski choosing to focus more on the stage rather than the opponent.

On the other side of the bracket are Kansas and Villanova, the former the second-winningest program of all time, and the latter seeking its third national championship since 2016.

"Being a regional champion is unbelievable, and that's what makes the event on Saturday for all four teams, it's the most amazing day in college basketball. To bring four champions together and then play for another championship. So we're very excited to be a part of that, very honored," Krzyzewski said.

While complimentary of UNC's growth and the success of first-year head coach Hubert Davis, Krzyzewski largely downplayed the revenge factor following the most recent matchup.

"You can't go into the Final Four just thinking rivalry, payback, or any of those things. You've got to go in - we want to win a championship. This is who we are now, this is who (we would be) whoever we would play and we got to beat them," said Krzyzewski.

While the two teams have never faced off in the NCAA tournament before, they have faced each other three times in a season, meeting in the ACC Tournament as recently as 2019 when Duke defeated UNC in the ACC semifinals after dropping the two regular-season games against the Tar Heels.

Krzyzewski said he believed both teams have evolved from their earlier matchups this season and said he was more focused on how UNC has played recently against other teams.

Duke held its final practice Tuesday morning, before leaving campus around 6 p.m., where students and faculty cheered the team on.

"First we want to support the team. We know it's their last time to practice in Cameron, and after that, some may go to the NBA Draft. So we are here to say hi to them, take pictures, and get some autographs," said Heteng Liang, a Duke graduate school student.

Hoacheng Chen, a fellow Duke graduate school student, added: "We went to the last game against vs. UNC, and the other home games. We love this team, we hope this team can beat UNC for the redemption. We will get this championship."

Both students are from China and are in their lone year at Duke at The Fuqua School of Business. And while they said the NBA is more popular than college basketball in China, they knew about Duke growing up, noting that Krzyzewski was the head coach of the US basketball team in the 2008 Olympics held in Beijing.

"It's crazy. It's one we cannot lose. We definitely need to win this one," said Liang of the rubber match with UNC.