'Durham is out of control': Shootings in Durham up 70% compared to this time last year, 22 of which have been fatal 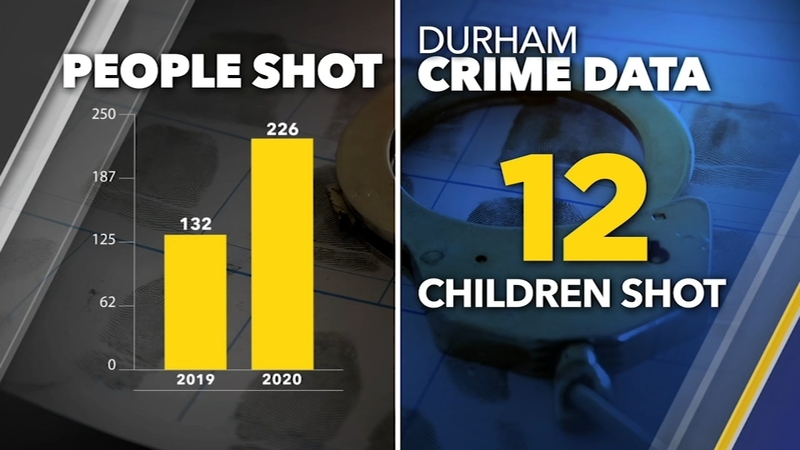 More than 200 shootings reported in Durham this year, 22 fatal

The most recent, being an 11-year-old girl who was shot in the head while riding in the backseat of her mother's car on Guess Road near Horton Road on Tuesday night. The girl was the victim of being caught in the crossfire of two other drivers shooting at one another.

No arrest has been announced just yet.

"I live right behind here," said Meagan Yackel, who also works at Italian Pizzeria off Guess Road, which is steps from that scene. "It's a little too close to home literally twice in one week."

On Wednesday, Yackel was cleaning on the American Tobacco Trail alongside her son and fellow moms with their kids when they heard gunfire. They found out later, two cars had been shooting at each other nearby.

"I just try and make him (son) aware that there is a real-world out there that isn't so pretty and not so nice," Yackel said.

Lavern Lucier is another mom who knows all too well the issues Durham is having with gun violence. Lucier's son Syncere Burrell was shot and killed while he was sitting in his car last month near his home on Lincoln Street.

"Durham is out of control right now," Lavern said. "Syncere had just turned 18, he just graduated from a program called Bull City Youth Build, he was a loving brother."

So far she said homicide investigators have no leads. She also has no idea who would have had it out for her son.

"It's very hard every time trying to get up in the morning," she said. "Your normal is not normal anymore--you don't get up to tell your son good morning."

The Durham Police Department (DPD) said it has recently developed new initiatives to focus on violent crimes. One of those provides increased visibility of officers weekly in the most impacted areas, which according to DPD, will allow for faster response times to gun-related calls for service.