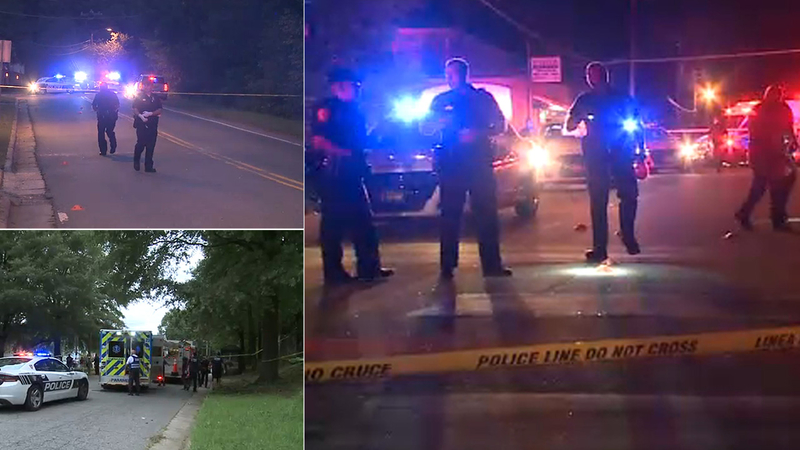 The first incident was reported at 4:46 p.m. when two men were shot on Shirley Street at Crest Street.

Officers said a white Mazda carrying three people drove by and fired shots from inside the vehicle.

The two victims were taken to the hospital with non-life-threatening injuries.

A few hours later, police responded to a shooting in the 3600 block of Danube Lane, where a man walking into an apartment complex was shot by two or three people in a blue, four-door hatchback.

That victim in this shooting also sustained non-life-threatening injuries.

The third shooting happened shortly after 9 p.m. in the 200 block of West Enterprise Street.

Two people were standing in the front yard when a dark-colored sedan slowed and two or three people began firing shots at them.

Again, the victims were not critically injured.

Around 11:30 p.m. another shooting happened. This one took place in the 3200 block of Nantuckett Avenue.

Investigators said a man on a bicycle heard a noise and then noticed his arm was injured. Police said he was hit with a BB gun pellet.

"Car came by, I heard a shot. At the same time I saw I was shot in the arm," Shahid As-Salaam, the man hit by the pellet, told ABC11. "And when I looked at it, blood was just running everywhere."

The 71-year-old is a Vietnam veteran.

"The pellet is still in my arm," he said. "They recommended that they leave it in there. I've got four pieces of shrapnel in my shoulder from Vietnam. Hopefully it'll work itself out."

The string of shootings comes just four days after Durham city and county leaders held a news conference to address gun violence and crime throughout the city.

That news conference was spurred on in part by the recent death of 9-year-old Z'yon Person, who was shot while on the way to get a snow cone with his family.