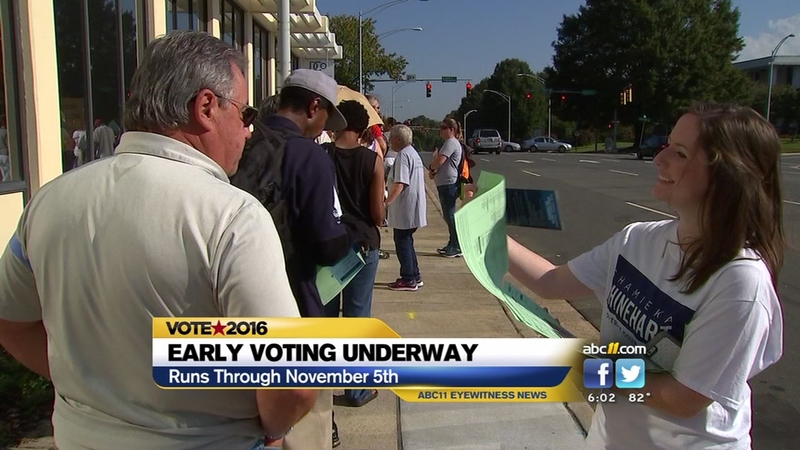 Early voting gets underway in NC

RALEIGH (WTVD) -- This year's contentious presidential election has people eager to have their say, if the long lines were any indication.

Early voting got underway in North Carolina on Thursday and people lined up early to cast their ballots in Raleigh and Durham.

In Wake County at Chavis Community Center, the line of voters stretched around the building when the polls opened at 9 a.m., and some waited an hour and 15 minutes to cast their ballots.

And at the Wake County Board of Elections in downtown Raleigh, Kate Mitchell, a self-described straight-ticket Democratic voter was one of those who came out to vote early.

Why was she so eager to cast her ballot? "I can't take a chance that I could get hit by a bus," she smiled.

Beverly Crowder of Durham just wanted to "get it over with."

The early-voting period covers 17 days until Nov. 5. It grew by a week after a federal court struck down a 2013 law scaling back the number of days. There is at least one site open in each of North Carolina's 100 counties.

There was some confusion on the first day of early voting. Most of it seemed to be caused by misunderstandings based on either old polling places or from the changes to polling places.

About 160 people waited in line Thursday morning at a polling place in Apex, and 120 were in line in Henderson in Vance County.

A site in Johnston County opened an hour late because of a wreck on Interstate 95, Patrick Gannon, spokesman for the State Board of Elections told The Associated Press. Officials planned to keep the site open one additional hour Thursday night, Gannon said.

Election officials are reminding voters if they want to vote early, they should go to an early-voting site, not their usual polling place.

Early in-person voting has been very popular - 56 percent of people who voted in the 2012 presidential election cast ballots by that method.

People can also register to vote at early-voting centers and vote at the same time.

CLICK HERE TO SEE HOW THE STATE BOARD OF ELECTIONS PROTECTS RESULTS .

This fall's ballot features races for president, U.S. Senate, governor, the Council of State and a host of judicial and local races.

At University City library in Charlotte, lines were two hours long Thursday morning and growing. Some standing in line said they were ready for the election to end.

"Voting is the equivalent of the shower we all needed after the three (presidential) debates," said Gregory Weeks, chairman of the UNC Charlotte political science department, who waited two hours to cast his ballot.

Back in Raleigh, Mitchell said she didn't mind waiting in line.