WTVD
RALEIGH (WTVD) -- Governor Roy Cooper unveiled a plan Tuesday that proposes to raise teacher pay and also pitched an education bond that would benefit schools from kindergarten through college.

Cooper outlined his plan while speaking to middle-school educators at a conference in Greensboro.

"North Carolina ranks 37th in teacher pay, and that's not good enough," Gov. Cooper said. "We need to put our schools first, and that starts with paying teachers and principals better and treating them like the professionals they are."

According to the governor's office, Cooper's plan would put North Carolina "on a path to become best in the Southeast in teacher pay in four years."

Republican lawmakers noted that beginning in 2014 when they provided teachers the largest raise in the country, "legislative Republicans have taken historic steps to raise educator pay in North Carolina."

The average base salary for a teacher in North Carolina increased by $8,700, or nearly 20 percent, since the 2014 school year, Senate leader Phil Berger, R-Rockingham noted Tuesday in a statement.

According to Cooper's office, teachers would see an average pay raise of 9.1 percent over two years with no teacher receiving less than a 3 percent raise in either year.

The plan eliminates salary plateaus for veteran teachers, allowing teachers with up to 30 years of service to earn more for each year of service.

The most recently passed state budget provided a 6.5-percent pay raise for teachers, the largest pay increase since 2014, and also allocated nearly $12 million to provide a permanent salary increase to veteran teachers with more than 25 years of experience.

According to the General Assembly's nonpartisan Fiscal Research Division, the average teacher salary for the 2018-19 school year will be roughly $53,700.

In addition, Cooper proposes restoring extra pay for teachers who hold a master's degree in the subject they teach and eliminating the requirement that teachers pay for their own substitutes when they take a personal leave day.

Berger's office noted that the 2018 budget also included "significant raises" for principals. It built upon changes made in 2017 when the General Assembly "reformed the archaic, confusing principal salary schedule by providing principals a 6.9-percent increase, bringing the total base pay raise to 13.1 percent since 2016-17."

Cooper's plan also proposes a $3.9 billion bond referendum to "invest in better schools from kindergarten through college as well as to improve other critical infrastructure."

"A bond is the smartest way to invest in school construction and renovation and other critical needs without causing harmful cuts elsewhere," Cooper said. "With a school bond, we'll get hammers swinging all across the state and still be able to afford good teachers and principals."

The proposed bond would include $3.1 billion for education efforts, including $2 billion for K-12 public schools statewide, $500 million each for facility improvements at community colleges and University of North Carolina System institutions, and $100 million in the NC History Museum and the NC Zoo, as well as other expenditures.

"Public education is our most important job as a state, and we must do better," Cooper said. "Better pay for educators, safe, modern school buildings, and opportunities for students to learn and stay healthy are critical to our state's future and we must invest in them." 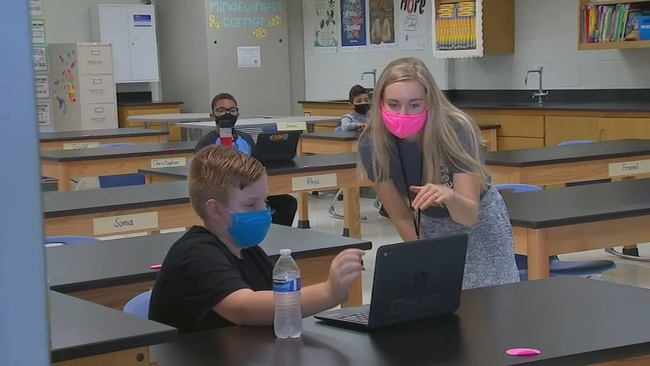 Another study finds it's possible for students to return to school safely
New construction struggles to keep up with Triangle growth
George Floyd's family unveil plan for memorial center to Raleigh mayor
George Floyd's past arrests can't be used at trial, judge says
Show More
LATEST: Cases still too high but decreasing, Cohen says
US 'actively looking' at requiring COVID testing before domestic flights
What we know so far about COVID-19 variants worldwide
Do some COVID-19 vaccines go unused? UNC says that is not the case
Biden signs executive orders to cut US oil, gas and coal emissions
More TOP STORIES News