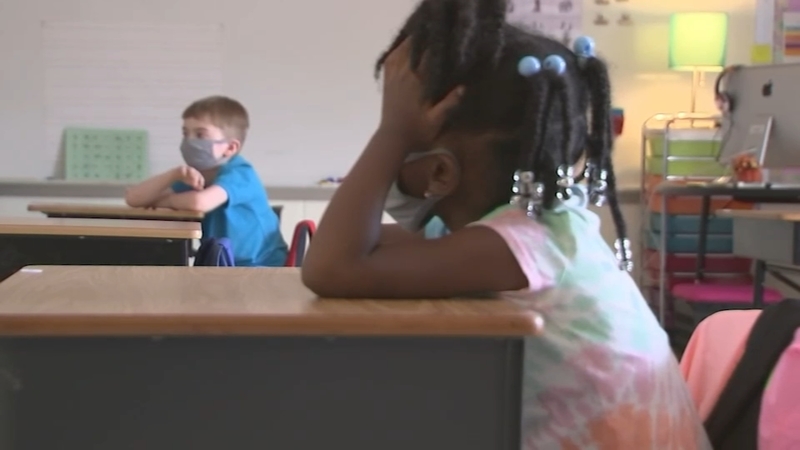 The tests, administered to public school students in grades 3-8, evaluate students' mastery of reading, math and later, science skills at their grade level as defined by the North Carolina Standard Course of Study. However, after a year when many students spent time learning outside the classroom, parents like Andrea Salman feel it's unfair to judge students using the same test they would have gotten had they been in the classroom for a full year.

"I felt a little nerve-racking only because this year has been crazy," Salman said. "What they have learned in their bedroom is what they were being tested on in the classroom, which I felt a little uneasy about it. But it's good to have a point to know where they are."

Salman's fourth-grader, Reese, said she thought she did well on her tests at Jones Dairy Elementary School in Wake County.

"I feel like it reflected on what I did in the past year so I don't forget any of it when I go into the next year," she said.

But Salman recognized that these tests have a broader impact.

"I was nervous for our school because I love our school," Salman said. "We have an amazing school. Our teachers are amazing. I did not want them penalized, and that can happen with end of grade testing."

Not only does each student get a grade on their tests, but schools also get a letter grade based on student performance. Those letter grades are then used to decide whether schools are high or low-performing. But some education advocates say those rankings correlate less to student achievement, and more to student demographics, particularly poverty. The tests also provide a basis on which the state Department of Public Instruction issues educator bonuses for some instructors.

"We want to continue to move the conversation that test scores are just one of the indicators in the whole effectiveness of student instruction and educator effectiveness," said North Carolina Association of Educators president Tamika Walker Kelly.

North Carolina Department of Public Instruction said in a written statement that the standardized testing requirement is federally mandated. However, the department asked and was granted a waiver so the results will not be used to evaluate schools' performances on a national level. At the state level, three state senators are pushing to pass a bill that would also give districts a pass on getting graded.

Walker Kelly and her organization are advocating to replace standardized tests, like end-of-grade assessments, with educator-led exams and graded student portfolios in which students could showcase different aspects of their work and learning styles across a number of subjects through project-based learning.

"It is time now for us to move away from high stakes standardized testing and use more authentic assessments that really highlight all the ways our students grow and learn throughout the school year," Walker Kelly said.

In addition, she added, this year's tests may not provide a lot of useful data for educators and officials because there are no other "pandemic years" in which to compare scores. Students were not required to take end-of-grade tests during the 2019 and 2020 school years because of the COVID-19 pandemic.

"I would encourage our educators, stakeholders, parents to just keep it as a reference of what their student knows, but not to lean on it very heavily to measure our students against that test at all," Walker Kelly said.

In Wake County, Keith Poston, president of the WakeEd Partnership, recognizes the need to measure where students have to make up for differences in skill accumulation during the pandemic, but said he's not sure standardized tests is the way to assess students after a mentally taxing year.

"We haven't even begun to understand the social and emotional and physical impact of the last year and a half on students," Poston said. "When it comes to stress the body keeps score."

Poston also pointed to the fact that charter and private school students don't have to take end-of-grade tests.

" I think we need to give our public schools as much flexibility as we can and trust our teachers. Trust our school administrators," Poston said.