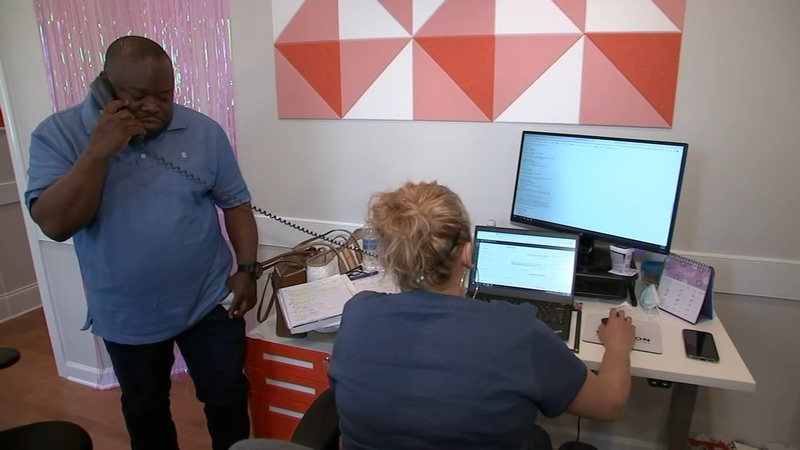 RALEIGH, N.C. (WTVD) -- Businesses at Spherion Staffing and Recruiting are busier than ever.

"We are seeing a lot more companies turn to us and actually the companies that we already work with are now expanding the jobs that they're given us," said Denise Pavona, the owner of Spherion staffing and recruiting owner.

The Raleigh-based business works to "put people to work" by connecting businesses and employees. The number of jobs it is tasked to fill has increased as some companies expand positions and others struggle to retain workers.

"I want to say toward the end of January, we had an order for 29 people," Pavona said of one of the companies they assist. "It's usually like we have one spot or two spots, but 29 all in one shot was a lot for them."

While Spherion faces greater demand from companies, Pavona said there are also difficulties in getting employees to commit.

"We do tend to get some folks that second guess and you know, just want to rethink it, because they do have options," she said.

At the end of 2021, there were nearly 11 million jobs open across the country, spanning almost every industry. As employees face more options, they have more freedom to be picky in the type of job and pay they want.

"It is money-driven, and it's work-life balance driven. That is a lot of what we're hearing from candidates just they have options," Pavona said.

Another impact of the pandemic was people reevaluating their careers.

A WalletHub study found around 3% of North Carolinians resigned over the last year, ranking the state 9th in the nation for its resignation rate.

Federal data shows across the U.S. an average of 5.7 million Americans left their jobs a month in 2021.

"One of the unique things about this COVID-19 recession is that in the aftermath we've had a large number of people who have upskilled themselves," explained North Carolina State University economist Mike Walden.

The impact of the mass number of employees changing jobs has impacted the overall economy.

A February report from the Chicago Federal Reserve found the surge in people searching for jobs while employed contributed to the rise in inflation by 1 percent.

"By applying for jobs in a different firm, employed workers can spur wage competition between the current employer and prospective employers. As a result, labor becomes more expensive to retain or to hire, effectively corresponding to a tighter labor market from the perspective of employers," the paper stated.

Walden further explained as companies increase wages to stay competitive those increased costs get passed on to consumers.

That's partially what's happening at the Umstead Hotel and Spa.

Beley said his hotel has raised the wages for almost every position to attract and retain workers. Still, he has around 20 opening positions that have impacted the hotel's dining room and spa ability to operate at full capacity.

He said the applications have started to increase and Beley remains optimistic about the future.

On Friday, the unemployment rate fell to the lowest level since before the pandemic, according to the U.S. Bureau of Labor report.

The 3.8% unemployment rate and 678,000 new jobs added last month, continue to show an encouraging side of the waning effects of COVID-19 on the country's labor force and offer optimism for industries facing extreme labor shortages.

Walden said employees switching and resigning from jobs is just one factor behind the level of inflation the country is experiencing.

"If people take away from this and say, 'Well if it hadn't happened, we wouldn't have had any higher inflation.' No, we would have because we've had other problems in the economy," Walden said pointing to supply chain issues and federal aid.

Overall, he said he believes the research out of the Chicago Federal Reserve is good news.

"I think it's always good news. When workers look at their skills, and if they're not happy with what they're getting paid. They look around and they see where can they go to get a better paying job?' Walden said.