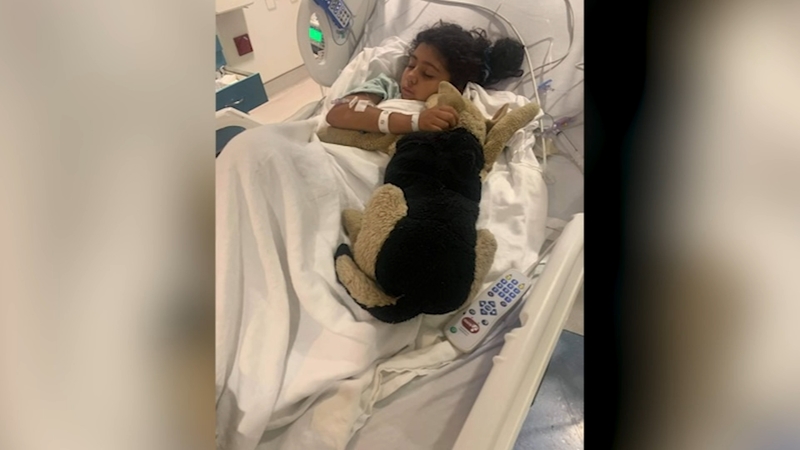 PEMBROKE, N.C. (WTVD) -- Estrella Sosa, 9, is in the fight for her life. She is responsive at UNC Hospital but the family says she has a long recovery ahead of her after being shot at least three times.

Over the weekend in Robeson County, loved ones say the vehicle she was in was shot up as they returned to their neighborhood in Pembroke.

Grandmother Regina Maldonado says she witnessed her granddaughter crying out in pain.

Maldonado says her granddaughter is still bleeding and the right side of her body is paralyzed.

The shooting happened just after 10 p.m. off Moss Neck Road.

On Monday afternoon, the Robeson County Sheriff's Office said it caught two of the people responsible.

Christian K. Locklear, 21, of Pembroke and a 16-year-old teen, of Lumberton, were arrested.


Two other minors are being sought in connection with the shooting.

Locklear is being held on a $1.5 million secured bond.

"Senseless acts such as this horrific incident cannot be tolerated," said Sheriff Wilkins. "To recklessly shoot at a moving vehicle for absolutely no cause is beyond comprehension. Any citizen in this county should feel safe in their travels. When kids with guns are allowed to roam at will and are accompanied by an adult that apparently had no regard for life, I take issue with that and they will be held accountable. I am just thankful that no one was killed but this is a scar on the memory of the victims forever."

Right now, doctors at UNC have Estrella now breathing on her own. She was previously on a ventilator, but it has been removed.

When that happened, Maldonado says all she could do was jump and shout.
"I know they thought I was crazy but let me tell you something that's the best feeling in the world to know that your granddaughter is breathing when she was right there at death," said Maldonado.


"She talks for a little bit but maybe two or three minutes and then she's out. She mostly wants her sister. Her sister is like her guardian angel."

Maldonado had a message for the shooters: "Please turn yourself in. Do what's right. We know who you are. All we are asking is that you turn yourself in. It's not right. My grandbabies don't even want to go back home. Because they are scared."

The child's mother, Retona Sosa, was shot in the arm but she is expected to be ok.