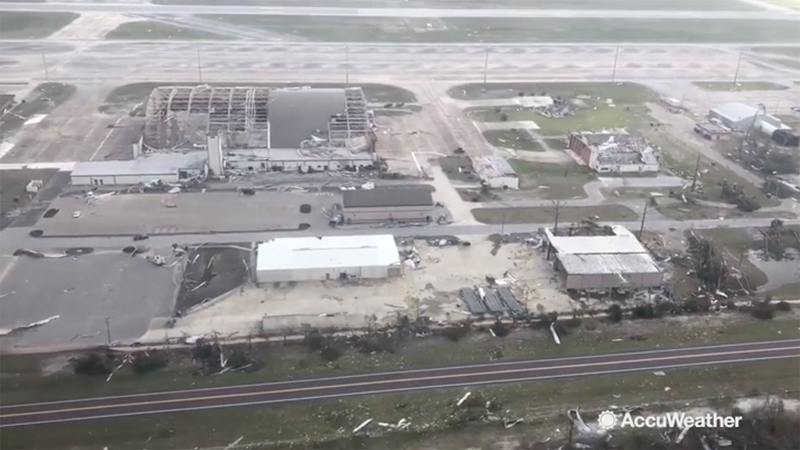 TYNDALL AFB -- Servicemembers and their families are now able to return to decimated Tyndall Air Force Base to assess the damage caused by Hurricane Michael.

Michael made landfall over Tyndall last Wednesday, Oct. 10, with the eye passing directly overhead. The destructive storm left massive and widespread destruction, according to AccuWeather's Jonathan Petramala, the first reporter to fly over the damaged base after the storm passed.

Petramala noted severe damage to living quarters and hangars that housed some of the world's most expensive fighter aircraft, 22 of which were still on base when the storm hit. The Air Force said the planes, which are each worth at least $300 million, were undergoing repairs and couldn't be relocated before the fast-moving storm hit.

Though much of the base was destroyed, Sen. Bill Nelson said earlier this week that it will be rebuilt.

Travis Air Force Base in Fairfield, California is sending two U.S. Air Force Cargo planes to Florida after Tyndall Air Force Base suffered "widespread catastrophic damage", according to a base official.

Nelson visited the military base just days after Michael tore across the Panhandle. The Florida Democrat said that older buildings on the base were demolished, while newer structures are in need of substantial repair.

After Hurricane Andrew hit South Florida in 1992 an air force base in Homestead was closed due to substantial damage. But Nelson, who sits on the Senate Armed Forces Committee, said that fears that Tyndall will close are in his opinion "unfounded." He said that Tyndall is in a strategic location for its training missions.