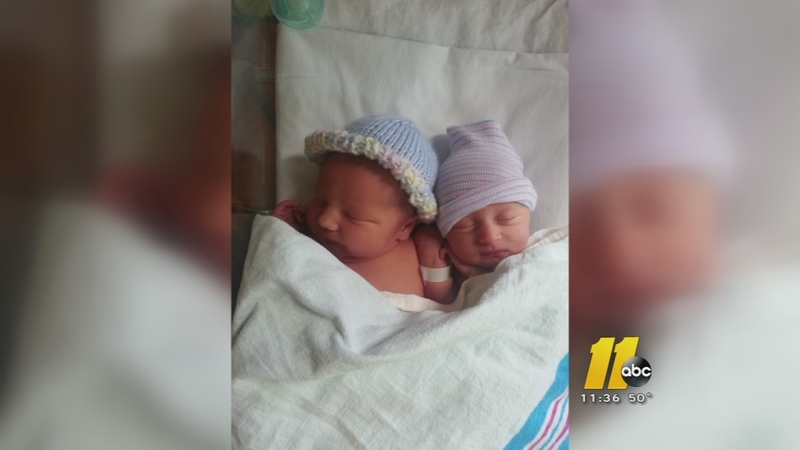 RALEIGH (WTVD) -- A Wake Forest couple gave birth to twins in the front seat of their minivan while on the way to Rex Hospital in Raleigh.

A little over three weeks old, twins Ransom and Dahlia are the picture of angelic perfection. However, their peaceful sleep now is a stark contrast to the chaotic way they came into the world. They were more than two weeks away from their due date when their mom, Courtney DeConto, felt the beginnings of contractions. So, she and her husband Marco got ready to head to the hospital.

"As soon as we got in the minivan my water broke. And then I realized I really was in labor, I didn't really think I was till we were in the van," said Courtney.

Her husband called 911, who advised them to stay put, but the couple felt that wasn't an option, so they started flying down the road toward Raleigh. They made it about fifteen minutes into their drive before it became clear they wouldn't be there in time.

"While he was driving I still had all my clothes on, so I was screaming 'take my pants off,' and he was trying to drive and take my pants off, and the baby came out and my pants caught him," Courtney recalled.

The couple had just turned off of Falls of Neuse Road onto Sandy Forks Road when their son Ransom was born. And about 10 minutes later on the ramp to I-440 their daughter Dahlia followed her big brother's lead.

"After he was born, Courtney picked him up, and sort of talked to him and was soothing him, in between contractions, and she was all maternal instincts like, 'welcome to the world, we love you,' and same thing with her [Dahlia]. She came and then she had both of them and she was talking to them and trying to keep them warm," Marco shared with more than a note of awe in his voice.

Following those amazing moments, the family arrived safely at Rex where nurses whisked them inside. And, once the babies were all cleaned up and swaddled, their parents felt an immense sense of relief.

"To have both of them delivered without medical intervention, and I'm a Type 1 diabetic as well, so there were just a lot of complications we were hoping to avoid. And in the end we avoided all of them in this crazy situation, so we just felt really blessed," Courtney explained.

Ransom and Dahlia were both perfectly healthy, so they were soon able to go home to join their big sister. As for whether the kids will hear about their grand entrance into the world someday?

"Oh yeah," said Courtney with a laugh, "I think they'll be sick of it by the time they're three, they won't want to hear it again."