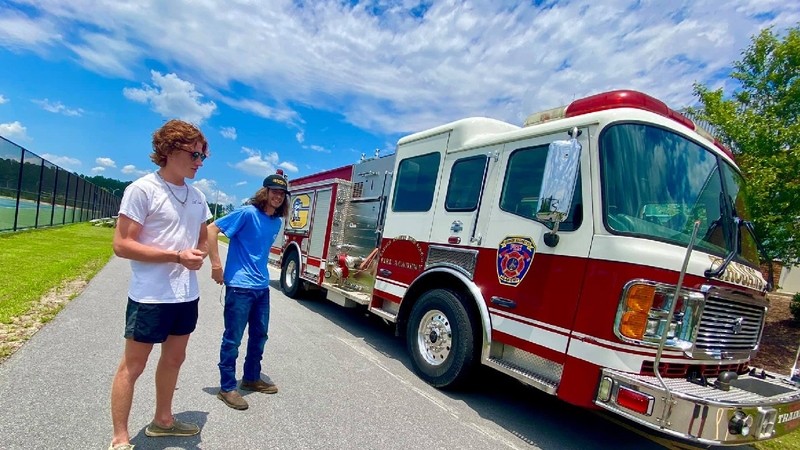 Dylan Ferrell and Grady Dawson had just left graduation practice at Garner Magnet High School when they rolled up on a bad wreck two miles away.

"I just looks like a bomb went off," said Ferrell.

"(There was debris) everywhere sort of," added Dawson.

They immediately jumped out to help.

"We both ran up as soon as we could," said Dawson.

"The driver was screaming 'Get me out!'" said Ferrell.

The Garner Police Department says the car fire happened when a driver failed to yield to oncoming traffic and hit another car traveling on Timber Drive. The car crashed into a tree.

Ferrell and Dawson say a driver and passenger were stuck inside.

Luckily for the victims, the two teens went through Garner High Public Safety Academy. They've been trained since their freshman year how to deal with a fire and treat a trauma patient.

They had tools and fire extinguishers in their cars. The teens were able to rescue the victims with some help from others.

"Some lady I never met in my life was helping me get the other door open," said Dawson.

The teens knew the people involved in the wreck. They're fellow classmates.

Ferrell and Dawson say both people in the car were injured, one more seriously.

"The driver, we need to pray for him," said Ferrell.

The teens brushed off the idea of being called heroes.

"I think anyone probably would have done the same thing," said Ferrell. "Luckily, we had the training to be able to perform."

"(We were just at) the right place, at the right time," said Dawson.

A good Samaritan stepped in and made a brave rescue -- by "immediately" jumping over the guardrail and into the bay, saving the infant.