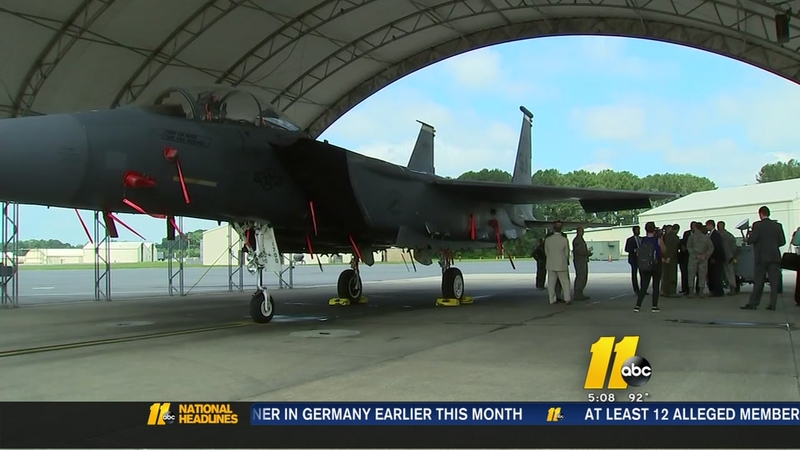 GOLDSBORO, North Carolina (WTVD) -- On Wednesday, Gov. Roy Cooper and Department of Military and Veterans Affairs Secretary Larry Hall toured Seymour Johnson Air Force Base in Goldsboro; they met with airmen, sat in on a briefing for a training exercise on the Carolina coast, and got a close-up look at an F-15.

Asked why he was there by an airman during a brief Q&A after the tour, Cooper replied to show his support for military men and women in North Carolina and their contribution to local communities.

"We stand ready to do anything we can to continue to strengthen this base and continue to support the men and women who work in and around the civilian population, the reserves," Cooper said. "We're going to keep this relationship strong."

.@GovRoyCooper & @Sec_Hall get close up on an F-15. What Cooper had to say about why he toured Seymour Johnson AFB today on #abc11 at 4. pic.twitter.com/VRVm49OpQW

During the briefing, Cooper and Hall were brought up to speed on Operation Razor Talon, a massive training op run monthly out of Seymour Johnson. The airman giving the brief told the two officials Razor Talon is one of the largest ongoing training exercises in the world.

The Air Force launches 40 fighter jets from Goldsboro, fly them close to the speed of sound out to the coast, and then split into two teams of 20 and run war games scenarios real-time. From the "war room" where Cooper and Hall were briefed, they watched digital representations of the planes engaging along the coast.

After the briefing, Cooper and Hall, their entourage, and accompanying media loaded up into vans and were taken out to the airfield where dozens of fighter jets sat under "sun shades," some being worked on, others sitting quiet.

Touring Seymour Johnson airbase w/@GovRoyCooper and @Sec_Hall. About to get briefing in the war room. Then to an F-15. Live Q&A at 11:40. pic.twitter.com/iUXTLOfebv

The group stopped at an F-15 fighter jet being worked on under a sun shade with floodlights, prompting Cooper to remark on a project with Duke Energy designed at outfitting all the tents with lights so crews can work on the planes around the clock.
Report a correction or typo
Related topics:
politicsgoldsborowayne county newsmilitaryroy coopernorth carolina newsair force
Copyright © 2022 WTVD-TV. All Rights Reserved.
TOP STORIES
NC weather forecast: State of Emergency issued for Orange County
Why do we get freezing rain instead of snow or sleet?
Hostages in N. Texas synagogue 'out alive and safe,' Gov. Abbott says
Gov. Roy Cooper warns all to prepare now for winter weather
Man shot, killed by officer at Duke University Hospital
AMBER Alert canceled for missing Durham 9-year-old boy
Tsunami advisory issued for US after volcano explosion
Show More
Netflix raises subscription prices again
N95 vs. KN95 masks: What's the difference between them?
Lee County deputy shot, expected to recover
Questions arise at vigil for man killed on I-440 by Raleigh police
Body camera footage shows moments after Jason Walker's death
More TOP STORIES News