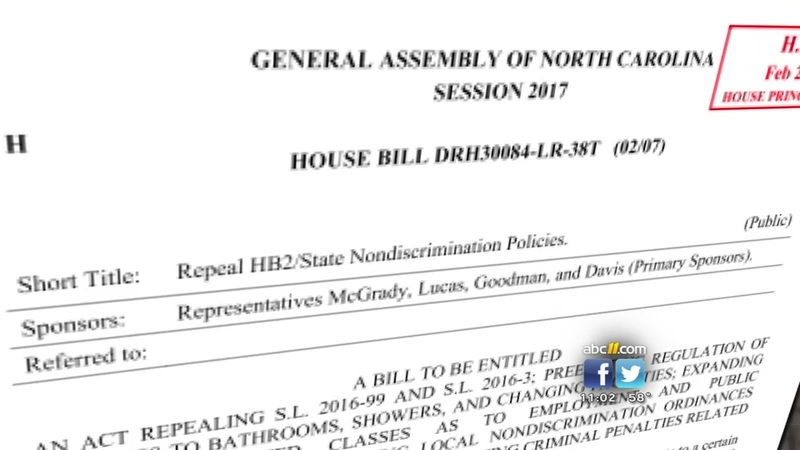 RALEIGH, North Carolina (WTVD) -- North Carolina lawmakers filed a bipartisan bill Wednesday aimed at breaking an impasse over the state's "bathroom bill," but it's likely to face tough going in the Republican-controlled legislature.

Two House Republicans and two Democrats sponsored the measure that would repeal House Bill 2, the law approved last March. But the proposal contains add-ons that led gay rights groups as well as Democratic Gov. Roy Cooper - who prefers a simple repeal - to immediately pan the measure.

Republican state Rep. Chuck McGrady, one of the four sponsors of House Bill 186, said he hopes it can secure enough votes for passage in his chamber. A deal between Cooper and Republican legislative leaders in December to repeal HB2 fell apart amid political acrimony.

#HB186 #HB2repeal bill would allow cities to regulate single-occupancy bathrooms only; allows for referendum on other changes. @ABC11_WTVD pic.twitter.com/8vygxoBHVB

Attempts at a resolution have mounted after a state sports association warned legislators the NCAA would soon remove from consideration local bids to host events through 2022, barring action on HB2.

"I feel like I can get a majority of Republicans and majority of Democrats on this bill if Gov. Cooper will help me get those Democratic votes, and I think that this is a good start," McGrady said.

"We must repeal House Bill 2 and I remain committed to getting that done," Cooper said in a statement. "But I am concerned that this legislation as written fails the basic test of restoring our reputation, removing discrimination, and bringing jobs and sports back to North Carolina. I will keep working with the legislature."

Equality North Carolina Executive Director Chris Sgro said anything but a "clean repeal of HB2" is "a distraction from the real issue."

Equality NC Executive Director Chris Sgro is not happy with the proposed bill to repeal HB2.

Under the legislation, state lawmakers would still control policy decisions over the use of multi-stall bathrooms in public buildings. Cities could expand other anti-discrimination protections, like those covering sexual orientation, after a four-month process. But a referendum on the ordinance would be required if opponents get above a threshold of signatures of registered voters in the city.