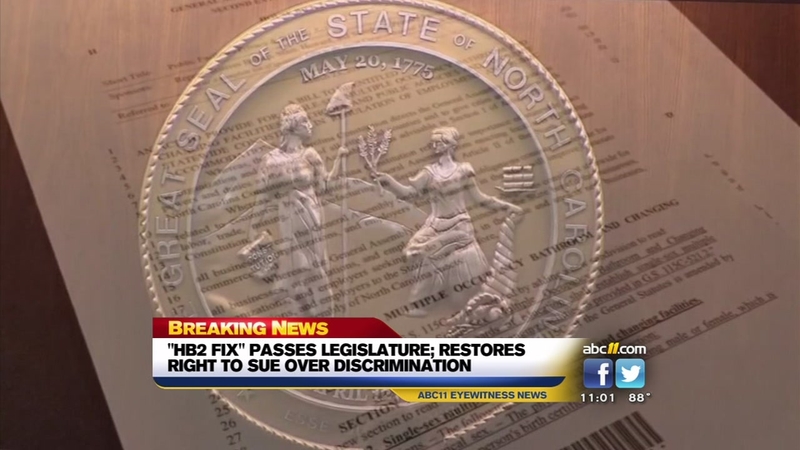 A release by Senate leader Phil Berger's office late Friday night said the Senate took action to address the request of Gov. Pat McCrory to restore and clarify the right to sue in state court for discrimination.

"Protecting the safety and privacy of North Carolina families by keeping grown men out of bathrooms, shower facilities and changing rooms with women and young girls has always been our primary objective," Berger said. "Today's action affirms and protects the core mission of the bathroom safety bill while answering the governor's and business community's calls."

The Senate passed a bill to allow North Carolinians to file a discrimination lawsuit in state court within one year of an alleged offense. This period is twice as long as the federal limit for filing an initial claim and is consistent with statutes of limitation for lawsuits on many claims in state court.

There was a lot of buildup to this one moment that was quickly passed by both the House and the Senate.

The House Bill 2 fix as it's being called is now going to McCrory for his signature.

House Speaker Tim Moore said earlier that he expected no other changes. The yearly legislative session is slated to end this weekend.

Moore hopes the revision will prove to the NBA that North Carolina is a discrimination-free area.

"I hope that they, and frankly any other business that concerns about discrimination arguments, sees fixing this issue with the access to state courts as addressing that," Moore said.

The NBA has threatened to move the 2017 All-Star game out of Charlotte because of HB2. It would be the biggest protest to date.

"North Carolina Values Coalition is not opposed to the reported technical correction bill that intends to reinstate an individual's ability to file suit for discrimination under state law. As the session comes to a close, we applaud the Governor and Legislative leaders for standing firmly behind HB2," said Tami Fitzgerald, executive director of the NCVC.

NBA Commissioner Adam Silver has called HB2 problematic and said, "I'm very concerned about singling out any minority group."
The All-Star Game is worth an estimated $100 million to a city's economy.

HB2 opponents said they believe lawmakers, like Moore, are playing Russian Roulette by not fully realigning the law.
"They are putting the state of North Carolina in incredible jeopardy with their political stunts right now," said Rep. Chris Sgro, who is also the Executive Director of Equality North Carolina.

"If the game leaves and the franchise, the Hornet potentially leave, think of the horrible domino effect that's going to have on our continued economic weakness," Sgro said.

The Human Rights Campaign issued a statement Friday saying that a full repeal of the law is the only acceptable solution.

HB2 was designed to block a controversial Charlotte non-discrimination ordinance, part of which allowed transgender people to use bathrooms and locker rooms of the gender they identify with, rather than their biological gender.