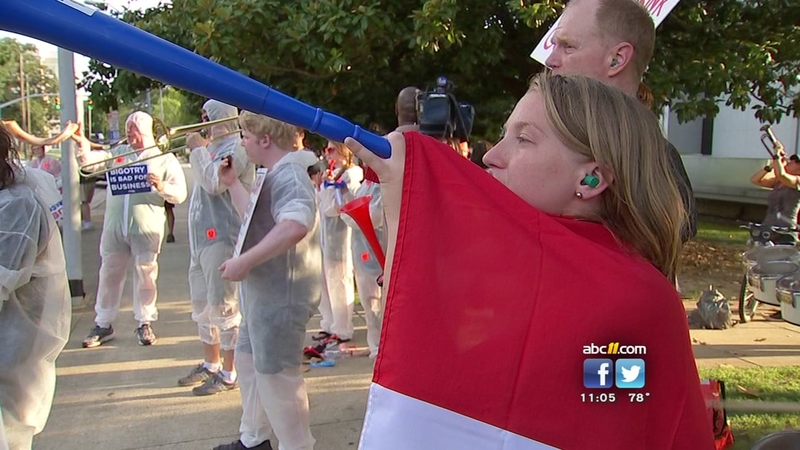 Air horn orchestra at it again

RALEIGH (WTVD) -- Pledging to protest until Election Day in November, the Air Horn Orchestra, a group of protesters angry about policies passed by Gov. Pat McCrory and the Republican-led General Assembly, sounded their disapproval once again Wednesday.

Every Wednesday for the past 19 weeks, the group has gathered on Blount Street outside the Executive Mansion, blowing air horns, whistles, and beating on drums hoping to hear a different tune from the McCrory administration over a number of issues.

"We will be here every week until HB2 is repealed and coal ash is addressed and gerrymandering is overturned," Elena Ceberio said.

Demonstrators, including a woman blowing a whistle and holding a sign that read, 'Can you hear us now?' pulled on biohazard suits to protest Duke Energy's coal ash controversy.

They're out to prove they aren't just blowing hot air, pointing to the recent resignation of state epidemiologist Megan Davies who stepped down saying the public is being misled about the safety of their drinking water.

Another protester played a tuba with the words 'this tuba fights hate' painted on the top as demonstrators called HB2 - the state's law regulating public bathroom use based on biological sex - a symptom of a bigger problem.

While organizers admit the orchestra's numbers have dwindled in the summer heat, they'll keep sounding off, sending their message at least until Election Day.

"I love this state," Ceberio said. "I love this city. But I hate what they're trying to do bringing us back to the dark ages."