ABC11 Together highlights the strength of the human spirit, good deeds, community needs, and how our viewers can help
WTVD
By Tamara Scott 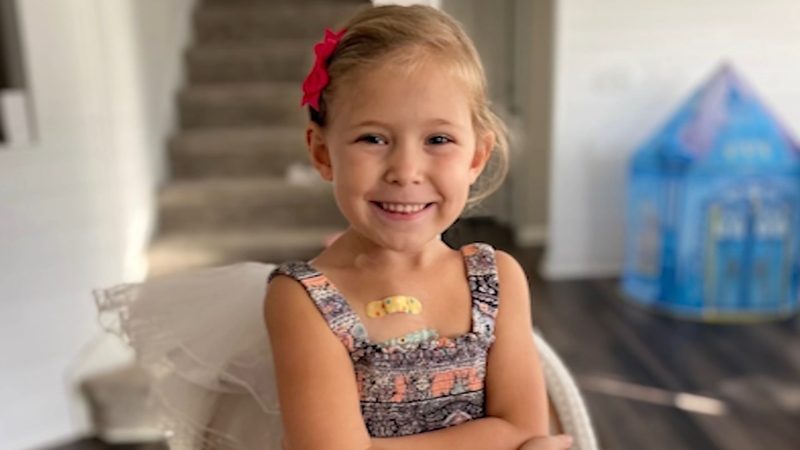 WAKE COUNTY, N.C. (WTVD) -- The family of a 5-year-old girl fighting cancer is staying strong, and now they are even working to give support to families dealing with the same diagnosis.

"She's very bossy, very demanding. Yes, she's the oldest of two girls and she knows it very much so, but she's the most sweet sincere and genuine 5-year-old," said Griffin Cox, of his daughter Perry.

He said Perry is a little shy at first but with a little time and the right music, she opens right up.

"Mrs. Dance, gymnastics, all that kind of stuff, but she's ready to get back into that as soon as she can. And this fall It's going to be, it's going to be a fun one," he said of her personality.

Perry's active lifestyle has had to take a backseat these past six months because of cancer.

"You know, there were the first couple of weeks or months, I personally couldn't tell people I could talk about it. But I certainly couldn't say Perry has cancer; like that was an impossible conversation to have," said Griffin.

Perry was diagnosed with a Wilms Tumor in September. It's a sort of cancer that starts in the kidneys and can spread if not treated rapidly.

"Treatment itself has given us lots of ups and downs. You know, she's a resilient, little 5-year-old who pushes through even when she feels like crap, I'm sure. And so she doesn't really show it much," said Perry's mom Brittany

Perry's parents are college sweethearts, best friends, and parents who, while their own child is suffering, are looking for ways to help others.

"We wanted to figure out something of like, what can we do? This is hard on us, is difficult. But there's a lot of families that have a way worse off than us," explained Griffin. "Some families have to travel quite a long distance to get to a really good medical facility. So the gas overnight meals if you're stuck in hospital for days on end."

That's why they started their nonprofit, High Hopes, and planned their first golf tournament this weekend to raise money for that cause.

"There's a lot of optimism and everything that comes from that concept. And we want it to be a big part of not just Perry's life," Griffin said. "But there's a lot of kids and families that are going to get a call today that their kid has pediatric cancer. And we want to be able to help support those families best we can and that's the big mission for High Hopes."

They're praying Perry's treatment can end this summer and get back to normal, but their philanthropy will continue.

"We'd also like to do some, you know, other events in the interim, you know, we're going to take this momentum from the golf tournament, and just keep on going. But we do want to turn it into an annual event," said Brittany.