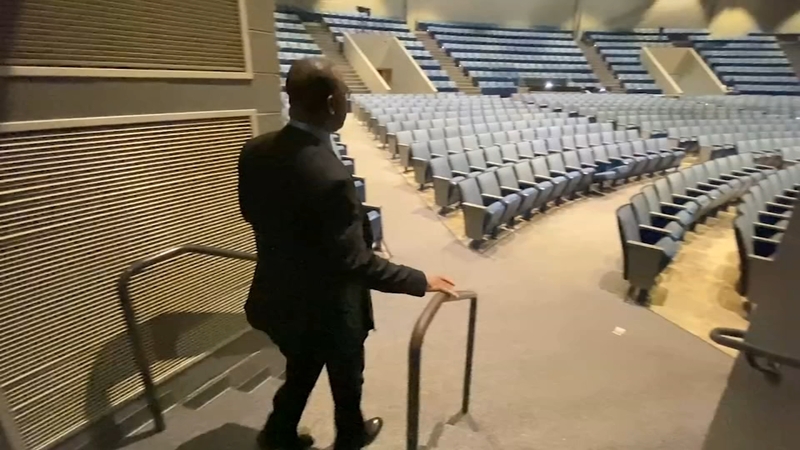 DURHAM, N.C. (WTVD) -- For decades, Wendell Tabb has watched curtains close on performances at Hillside High School, always thinking of the next play to work on. But when the curtains close Sunday, there will be no next play.

"This is it," said Tabb, sitting in the theatre that bears his name.

After 35 years and more than 100 plays, the beloved Director of Theatre at Hillside High is retiring, believing now is the time for a new and younger voice to lead the program he helped build.

"I've shared many tears already sometimes just being in this theatre by myself and just reflecting on all the students that I had a chance to work with," said Tabb.

Many of his students have pursued careers in the arts, some landing roles in network series or major film productions.

"Having someone outside of your household that you don't see every day that is uplifting you every moment, and doing what they can to make sure that your dreams are coming true or that you are challenging yourself," said Hillside High senior Omari Scott, who serves as Stage Manager.

Scott referred to Tabb as a "father figure," expressing gratitude for the impact on his time at Hillside.

"When I came here, he made sure that we were not shy, whatever dreams that we had to make it possible and help us make it possible for ourselves. (He taught us to) never be shy saying your name, never be shy introducing yourself, and when you're doing something that you love, it should come naturally. So he's really inspired us to come out of our shells. Because we all came into high school (as) quiet kids, not really that social. And look at us now, we're always talking to somebody," Scott laughed.

The close-knit relationship has elevated the importance of the final performances.

"We really want to just make it the best to really put it out there so people know this was Mr. Tabb's legacy and this is what he has done, and this is his final one. And it's going to be really special," said junior Aniyah Lowe, the Drama Club president.

Tabb explained selecting which plays students would perform has been one of the highlights of his role, often choosing scripts that deliver a strong message. Last year, students performed "State of Urgency," in response to rising gun violence in Durham.

"I just knew if I was going to be in education that I needed to be a voice for the students. And having them in my class, and them talking about they've lost someone that they know, what they were going through as it related to gun violence, and I said, well 'I'm in this position. I can be a voice for them,'" said Tabb.

During a tour of the school's facilities, Tabb highlights the resources, from a costume room to a technical set to a recording studio in the process of being completed; many of the resources have been secured through donations.

"That's very important, to keep the arts alive. When I worked at the National Endowment for the Arts in Washington, D.C. for the summer, I was able to see so many different programs where they had a lot of things for the arts and then there were some who had nothing. And I said if I ever start a program, I'm going to give them the best opportunity they can, regardless of where they come from, (or) what their situations are like," Tabb said.

A North Carolina Central University graduate, Tabb speaks warmly of being embraced by the Bull City, delivering a message to the thousands of people who have come to the school to watch students perform.

Tabb's retirement date is June 1, though the sold-out performances of "Mufaro's Beautiful Daughters" Thursday-Sunday will be the last ones during his tenure. If you're interested in attending, ticket information is here.
Report a correction or typo
Related topics:
educationdurhamdurham public schoolsteachertheaterreturn to learnretirement
Copyright © 2022 WTVD-TV. All Rights Reserved.
TOP STORIES
New NC flood monitoring system ready for next big storm
Homeless veterans get an assist from Durham's Rotary Club
Shelf cloud seen in Raleigh ahead of line of storms
Truck slams into NC woman's new home
Father puts 1,000 miles on his car to find specialty formula
Student says he was told not to mention 'Don't Say Gay' law in speech
Clayton police arrest man in shooting that injured 1
Show More
More than 75,000 pounds of baby formula lands in US amid shortage
Report: Top Southern Baptists stonewalled sex abuse victims
Arby's is selling a fast-food staple it's never offered before
Biden: US would intervene with military to defend Taiwan
Wake County begins giving COVID booster shots for children ages 5-11
More TOP STORIES News