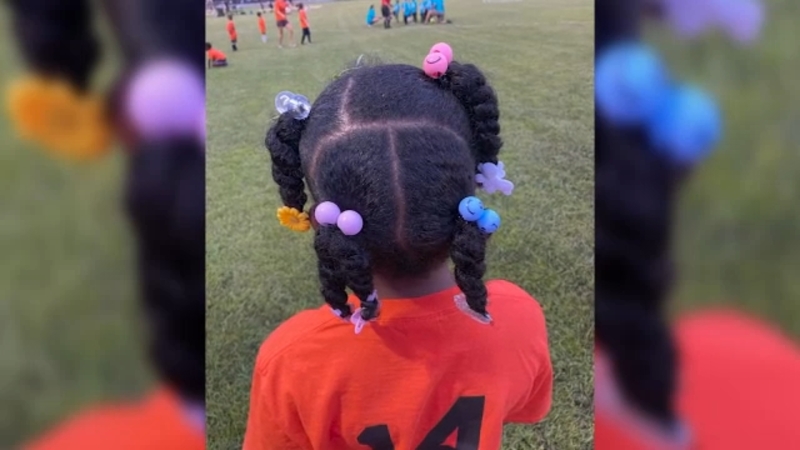 HOPE MILLS, N.C. (WTVD) -- Colorful clips and bows in a 6-year-old's hair got the attention of officials at a youth soccer game in Hope Mills Monday night. But it's what happened next, before the game started, that concerns the child's parents.

Darialle Marshmon said her husband and daughter returned from the field where the child learned she wouldn't be allowed to play. That official cited the girl's hair as the reason, Marshmon said.

"I want a formal apology to my family and to my daughter," she said. "She went off the field, crying, confused, six years old: 'I don't understand what's wrong with my hair! I've been wearing my hair this way forever.' Other children, boys and girls had -- they had beads on and they were playing in their game."

The girl's father stood up for her after the official told her she wouldn't be able to play.

"And my husband even asked them, 'what needs to be removed so that she can play?' He was like, 'and how about this, we'll take it as a warning about her hair, let her play the game next game, we'll know what to do.' Nobody even offered a solution for her to play in her game," Marshmon said.

A father is filing a $1 million federal lawsuit against a Michigan school district. This is why the suit alleges discrimination.

Then, she said, he asked about rules that govern hair during youth soccer games.

"So one of the other volunteers, I'm not sure her name, she comes back with a piece of paper with the rules and regulations on it. It said no jewelry, watches, rings, necklace, hair beads, hair wear of any type, can be worn during the game. My husband explained to them, this is not beads or headwear, these are ponytail holders, and clips, this is what holds her hair together. If they removed it, her hair is going to be all over her head," she said.

ABC11 reached out to Hope Mills. Maxie Dove, the assistant director, responded quickly with phone calls and a PDF of those rules. The girl's mom insists the clips that were in the girl's hair are not covered under the rules.

But a parks and recreations spokesperson said that, while the hair decorations must be "soft material," they will apologize to the family for the way it was handled, and do their best to explain the rules better going forward.
Report a correction or typo
Related topics:
societyhope millshairchildrensoccerfamilysportsrace in americayouth soccer
Copyright © 2022 WTVD-TV. All Rights Reserved.
TOP STORIES
Toddler and man killed in Raleigh apartment shooting, woman hurt
Gas prices decline in Raleigh but experts worry about meaning of dip
Sticker shock for young would-be renters as apartment leases spike
Man dies hours after shooting at Raleigh gas station
Grandfather of woman shot by Fayetteville police searches for justice
What to know if your flight gets canceled or delayed
Raleigh City Council adopts 'social districts' ordinance
Show More
Raleigh woman recovering, arrest made in San Diego shooting
Couple fined $1,500 for parking in own driveway
Creedmoor rallies around family that lost everything in house fire
DHS warned of 'heightened threat environment' before parade shooting
Parents of late NFL star Demaryius Thomas reveal he had Stage 2 CTE
More TOP STORIES News