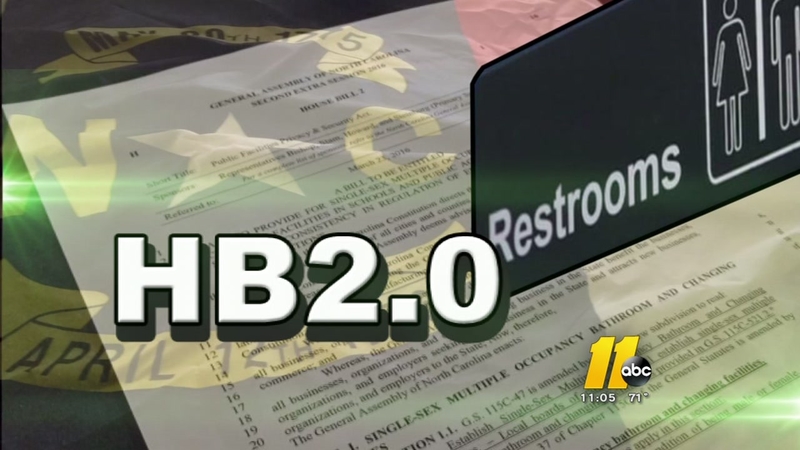 RALEIGH (WTVD) -- House Republicans are said to be drafting changes to House Bill 2, and there is one change brewing that has critics up in arms.

.@cristoferosgro says new HB2.0 drafted "in the dark of the night" would require transgender people to register w/state to use bathrooms

ABC11 has been told that the change would have transgender people register with the state.

In a news conference, State Rep. Chris Sgro, D-Guilford, accused House Republicans of drafting what he called "HB2.0" -- in the dark of the night.

"I've heard earlier that representatives in leadership that we will be out of here on Saturday," Sgro said. "None of us can or should go home in good conscience with a bill that is destroying the reputation of our state and putting LGBT people at risk for discrimination remaining on the books."

Some of the proposed changes in a draft that Sgro obtained from a Charlotte TV station and then shared with ABC11 include:


He said the revision is not a compromise, not a deal. And it doesn't change anything when it comes to municipalities drafting their own non-discrimination laws or setting their own minimum wage.

A spokesman for House Speaker Tim Moore reaffirmed that discussions about modifications to HB2 have taken place.

"There's no secret we have been having conversations about HB2 with different constituencies for weeks," said Andy Munn, Moore's chief of staff. He cited media reports and pointed out that Gov. Pat McCrory himself has issued an Executive Order to request changes to HB2.

"The point is," he added, "numerous business leaders, individuals and groups contact the Speakers' Office daily and we receive, appreciate and sometimes vet their ideas. At the end of the day, the Speaker remains committed to making sure our citizens have the right to expect privacy in bathrooms and showers."

The ACLU and Lambda Legal condemned the proposed changes.

"These proposed changes are no fix. After rushing to enact H.B. 2 in a span of hours, this is the second attempt-the first was the governor's executive order-to clean up the extreme and discriminatory mess of H.B. 2. The only real solution is the full repeal of the law," the groups said in a joint statement.

"During this critical last week of the session, we urge the Governor and Legislative leaders to continue to stand firmly behind HB2 to maintain privacy and safety for women and girls in our state's bathrooms, shower facilities, locker rooms and schools," said Tami Fitzgerald, Executive Director of NCVC.

The House has adjourned for the day.