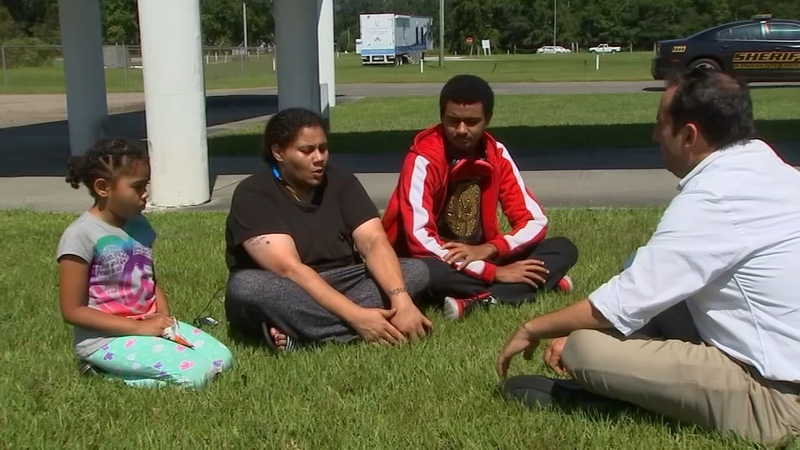 Hundreds in shelters anxious to return home after Dorian

PLYMOUTH, N.C. (WTVD) -- They are the simple pleasures that now are the most sought after luxuries.

"The space, the privacy, the fact that we can take a shower," evacuee Evelyn Robles laments to ABC11. "Honestly, we just want to go home."

Robles and her three children left their home in Engelhard on Wednesday; the community sits on the Pamlico Sound side of Hyde County directly across Hatteras Island.

"When I heard Category 3, I just thought about my children," Robles says of Hurricane Dorian. "I wanted to take precautions."

Indeed, the precautions proved salient, as Dorian churned its way through Eastern North Carolina with fierce winds and torrential downpours. Though communities in the southeastern part of the state escaped relatively unscathed, the severe weather wreaked havoc on the Outer Banks.

Robles says friends of hers who stayed back described the damage as "limited" in her neighborhood, but she won't know for sure until she gets home. That can't happen until officials reopen several bridges and routes connecting the Outer Banks and the North Carolina mainland.

For now, the Robleses have shelter at Pines Elementary School in Plymouth, a shelter serving several dozen evacuees from Hyde, Dare, Tyrell and Washington Counties.

"We're grateful for the help," she says.

Other evacuees, like Quadeisha Richardson, have no information about their homes in places like Manteo, also cut because of the closure of the Virginia Dare Memorial Bridge.

"I'm worried I'm not going to be able to go back inside my home," Richardson explains to ABC11. "The furniture, the floors, just getting flooded, losing items, and having to renew things."

Volunteers and case managers from the Red Cross tell ABC11 the shelter at Pines Elementary will stay open as long as necessary, but evacuees will continue to need assistance well after their time in their care.

"They're going to find they need mops, buckets, brooms, bleach, tarps," Erica Mani, a Red Cross manager, says to ABC11. "We'll be working with all the partners in this area, county management and so many more."

North Carolina Emergency Management on Saturday confirmed no additional deaths have been reported from the storm, and the number of people in shelters is expected to drop in the next 24-48 hours. About 57,000 were still without power.