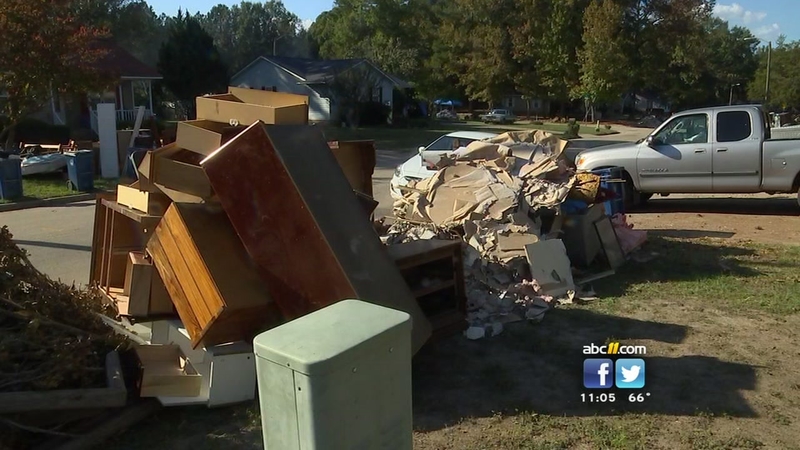 The latest on recovery efforts after Hurricane Matthew

RALEIGH (WTVD) -- Just over a week after Hurricane Matthew, officials said the river levels have begun to drop. The waters are slowly receding but not fast enough for North Carolina towns that are still flooded. Officials have estimated at least $1.5 billion in damage to 100,000 homes, businesses, and government buildings.

Governor Pat McCrory said at a news conference in New Bern Monday that the death toll for the state has dropped to 25. A Robeson County death blamed on the storm has now been attributed to another cause.

In Princeville, six pumps are draining about 1.6 million gallons of water per hour, but it could still be days before officials can get into the town. In Moore County, eight pumps are in the process of lowering water levels at the Woodlake Dam.

One of the homes that remains flooded.

State officials said that all rivers are expected to be below flood stage by October 24. Greenville, Tarboro, and Goldsboro should return to normal by Thursday.

There have been 2,300 rescues since Hurricane Matthew hit, and for the first time Friday night, McCrory said there were no rescues necessary. Remarkably, two healthy babies were born in mobile hospitals in very rough conditions.

McCrory has said that he had one of the most emotional days of his life Friday, touring the devastated towns across eastern N.C.

"While our recovery efforts are going strong, we still have many people who need assistance," said Governor McCrory Monday. "The good news is that most of the rivers have now crested and are currently receding, but we still have a long way to go."

In Princeville, nearly 80 percent of the town is underwater. About 2,220 people have been evacuated from the historic town.


Those who qualify for individual and public assistance in Edgecombe County can call (252) 824-0108 for help.

McCrory says of the 25 people in North Carolina who have died because of the storm, almost all of them have been vehicle-related deaths.

The latest deaths were in Cumberland County and Wayne County. The governor said they were each found in submerged vehicles.

"This has been the cause of nearly every one of our deaths, either people walking or being caught in their cars," McCrory said Saturday morning.

Thursday, US Army Specialist Timothy Smith and Sgt. First Class Timothy White did not hesitate to dive in and rescue a black Labrador from the flood.

McCrory said as he's toured the hardest hit areas, it's clear to him that it's the poorest of the poor in North Carolina who have suffered the most as flood water has inundated neighborhoods, severely damaging homes and ruining cars.

He asked the nation to dig into its pockets to help out.

"These people have nothing. Nothing. And if you want to help, now is the time to help these people," he said. "They are sitting right now in high school gyms. There are whole families."

McCory said the state has activated the NC Disaster Relief Fund in partnership with the United Way.

If you have items to donate like water or clothes, dial 211 and someone will direct you on where to go.

The Red Cross and Salvation Army are partnering with the county to help the donation center.

For people stuck in shelters, McCrory said the state is working with Walmart to get long-term prescriptions to people who need their medicine.

The goal is to get people in shelters into hotels and rental property while their homes are flooded or remain too damaged inhabit. Some will be moved to long-term FEMA housing when it becomes available.