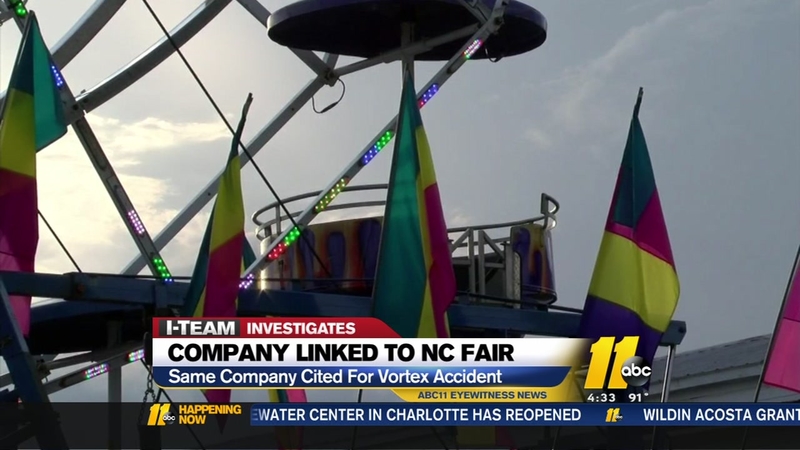 Almost three years after the worst state fair accident in recent memory, the company that owned the ride is back in the news, this time for another fair ride accident in another state.

The Macaroni family owns Family Attractions Amusement in Georgia, which owns the Ferris wheel that malfunctioned in Tennessee on Aug. 8. The company also owned the ride that went out of control at the North Carolina State Fair in 2013 after the operator, Tim Tutterow, tampered with safety equipment on the Vortex.

On Wednesday night, a private inspector and police in Tennessee blaming the accident on "mechanical failure," but government investigators are still sorting out exactly how the Ferris wheel seat flipped over, sending three girls plummeting about 25 feet to the ground.

The accident left a 6-year-old girl with a traumatic brain injury, and has prompted renewed scrutiny of the lack of state or federal inspections to ensure that traveling carnival ride has been safely installed before it opens for business.

Tennessee authorities decided to stop doing inspections altogether after a 2014 audit found shortcomings in the state's regulatory program for rides at fairs and amusement parks.

The state relies instead on private inspectors hired by ride operators as well as inspections in other states to determine whether roller coasters, zip lines and Ferris wheels are safe. But there is no state requirement for an inspection to confirm that traveling equipment has been properly reassembled before children climb on board.

Greeneville Police Capt. Tim Davis said at a news conference late Tuesday that "mechanical failure" appeared to have caused the basket the girls were riding in to overturn Monday night at the Greene County Fair in eastern Tennessee.

Frank Gunther, an inspector hired by Family Attractions Amusement, also cited mechanical failure at the news conference Tuesday night. Three other inspectors - the police captain didn't say who they represent - are at the scene investigating.

Bracken Burns, the director of trauma services for Johnson City Medical Center, said the 6-year-old was critically injured, while her 10-year-old sister and a 16-year-old female who shared their seat were described as stable. Burns said the 10-year-old's forearms were injured, and that he couldn't release information on the other girl.

The company received its permit to operate the Ferris wheel in Tennessee for the next three months based on a June inspection in Indiana, according to state Department of Labor and Workforce Development spokeswoman Jennifer Farrar.

Because of this accident, the operators will have to have a new third-party inspection conducted before the ride can qualify for a new annual permit in Tennessee, Farrar said.

In a follow-up to the audit last year, the state Department of Labor and Workforce Development said Tennessee law does not require the state to hire its own inspectors. Funding for the Amusement Device Unit was requested for the budget year ending in June but was denied.

Tennessee shifted responsibility for ride inspections from the state Department of Commerce to the Department of Labor and Workforce Development in 2009, but failed to develop a "viable amusement device regulatory unit" thereafter, the 2014 audit found.

Auditors said mistakes in record-keeping and a lack of inspectors created "serious concerns about whether the unit is able to ensure that all amusement devices in the state are appropriately permitted and inspected both annually and following accidents and fatalities."

The Greene County incident was the eighth injury incident reported to Tennessee authorities on amusement rides this summer. In Gatlinburg, a woman's wrists and knee caps were fractured when she was ejected from a ride. At three different attractions in Pigeon Forge, people suffered a broken arm on a roller coaster and back injuries were reported after doing flips at a trampoline park and getting hit from behind on an alpine coaster.

After the accident in North Carolina in 2013, the state made a number of changes in how it considers and contracts with companies at the fair. This is a list of those changes given to us by the Department of Agriculture.