WTVD
By Joel Brown
MORRISVILLE, N.C. (WTVD) -- Bharath Somu, his wife and young son took off from RDU International on February 25 on a flight bound for his native India. They landed in Chennai on the southern tip of the country for his brother's wedding and to be with his father for a minor surgery.

But, the vacation quickly turned into a nightmare as COVID-19 concerns spread around the globe.

"There was a lockdown in India and the flights were canceled and we got kind of stuck here," Somu said over the phone to ABC 11.
FULL CORONAVIRUS COVERAGE

The family's return tickets were for March 26. But India's airports shut down over the coronavirus two days prior. Planes remain grounded there.

"Right now there are no commercial flights; no way we can come to the U.S.," Somu said. "The airports are closed."

STUCK IN INDIA: India’s COVID lockdown and the U.S. State Dept’s policy on repatriation flights have turned into a 2-month long nightmare for this Wake County family.
Tonight, We talk to dad, a RTP tech worker, about his struggle to get back home to Morrisville. #abc11 pic.twitter.com/AH00VNhqgg

Somu works in tech at a Morrisville firm. He and his wife Nithya have lived in Wake County for the past five years under Somu's H1-B work visa. The couple's 4-year-old, Thakshai, was born in the Triangle; he's an American citizen.

But, currently, the only flights leaving India for the United States are flown by the U.S. State Department -- repatriation flights for Americans. Tokshai is eligible, but the U.S. says only one parent on a visa can fly with him.

Somu's been reaching out to elected leaders here at home for help. "Everybody tried to help me. But there is a defined rule which cannot be made as an exception -- that only one parent can travel with a U.S. citizen," he said.
Morrisville town councilor and immigrant-rights advocate Steve Rao is one of the officials Somu sought out for help. So far, Rao's had no luck convincing Washington.

"To separate families like this doesn't make sense," Rao said. "To say only one parent can come back with the child -- you can't run a family if you don't have the family together. It just doesn't make sense."

It's been even tougher explaining it all to Somu's 4-year old. Tokshai is not adapting well to the hundred-degree temperatures and high humidity of southern India. The father says his son is missing the simple joys of bike rides at home in Morrisville.

"He's really upset," Somu said. "And as a father, I also have a responsibility to bring him back where he was born and where he was used to being these four years."

Along with Somu's job -- he and his family have a home with a mortgage and a car with a loan to pay which are all sitting idle in Morrisville. Somu forced to navigates those responsibilities from 8,700 miles away -- with no answer on when they can come home.
Report a correction or typo
Related topics:
community & eventsmorrisvillecoronavirusflight divertedcovid 19 pandemiccovid 19 outbreak
Copyright © 2021 WTVD-TV. All Rights Reserved.
CORONAVIRUS 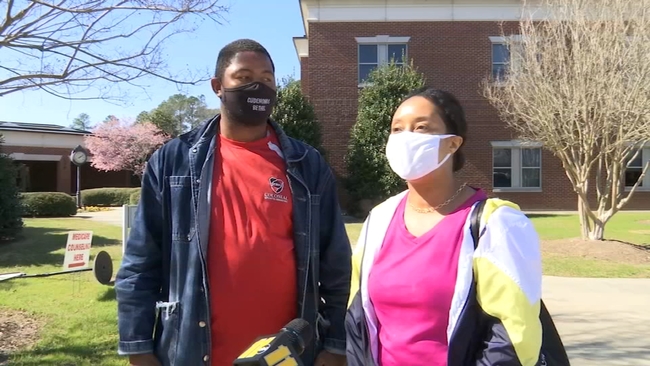