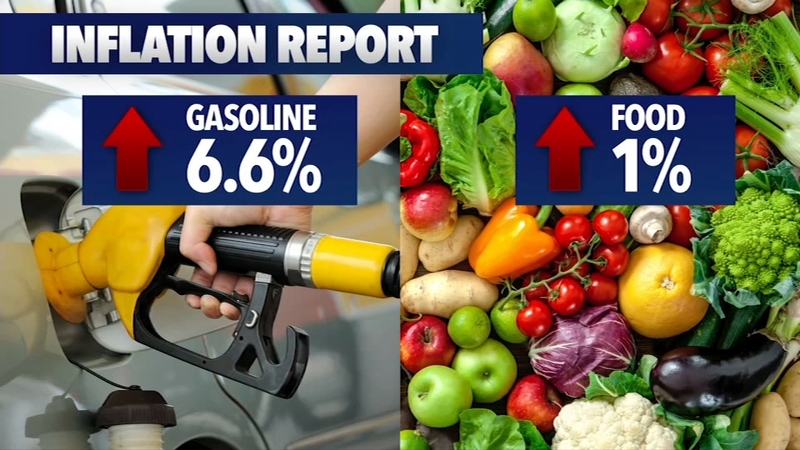 RALEIGH, N.C. (WTVD) -- A new report released by the Labor Department found consumer inflation rose by 7.9% over the past twelve months, the largest increase since 1982.

"I think (lower-income earners) are in a lot of ways in a crisis right now, because many of those people are the people who can't work from home. They have to get on the road and go to work. They have to get gas. They have to figure out how to feed their families on a much more limited budget. I think those are the folks I probably worry about the most," said Dr. Henry McKoy, the Director of Entrepreneurship at NC Central.

Over the past year, gas prices are up 38%, food prices in-line with general rates at 7.9%, airline fares increased by 12.7%, and hotel and motel prices jumped 29%. The ongoing invasion of Ukraine also causing prices to rise, especially with gas and certain food products.

Local non-profits and food banks are working to address a potential increase in need, as families look to closely evaluate their budgets due increased costs.

"We're definitely hearing some people who are having to stretch things even further because of the rise in prices," said Jennifer Caslin, the Marketing and Project Manager at the Food Bank of Central and Eastern North Carolina.

While the food bank did see a decrease in requests as omicron cases dropped, they're still up 30% compared to last year.

"When things start to cost more, it affects everything. It affects us here at the Food Bank, and it affects bottom line the people that we're serving," said Caslin.

The improved COVID-19 metrics have allowed more volunteers to return, which is helpful to sort through donations.

Over at Chavis Park, staffers with The Produce Project, a non-profit organization, distributed food to subscribers Thursday afternoon.

"When I started with Produce Project two years ago, I found that I needed the assistance coming from it. That was part of the benefit on my end. When the pandemic hit, I was not able to work anymore. So this was able to keep us flourishing in our household," said Kelli Pfitzner, who was recently named the program's director.

For $18, subscribers are able to pick up a large assortment of fruits and vegetables at sharply discounted prices.

"On an average day, each share averages somewhere between $40 and $55 at the grocery store," said Pfitzner.

"It really stretches your dollar, but is also really gets you to try out new fruits and veggies that i may not normally buy. And you're not buying in bulk. So you get the bulk prices without having to commit to a whole bag of potatoes or a whole bag of onions," added Linda Stafford, a subscriber.

The Produce Project distributes food Wednesday's from 3-8 p.m. at its headquarters on Capital Boulevard and from 3-8 p.m. Thursday's at John Chavis Memorial Park.

"We're seeing people from all over our city. But we're seeing a lot of neighbors just walking, and (we) realize this is known to be a food desert, so having the opportunity to bring people to his community center for their produce is a unique experience in its own," said Grady Bussey, the park's director.