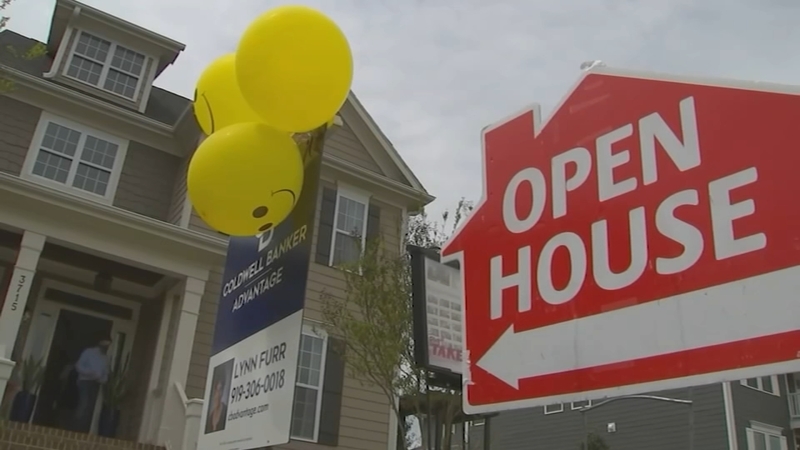 RALEIGH, N.C. (WTVD) -- If homeowners in the Triangle had something to say about the Raleigh housing market on Thursday, it would probably sound like an echo.

Warren Phillips said his daughter was looking for a house, but the search for an affordable home is challenging.

"I feel really sorry for somebody trying to buy a house, especially a young person," Phillips said.

The Federal Reserve's rate hike of 0.75% doesn't directly affectmortgage rates, but those have climbed as well, from 3% in January to nearly 6%, the highest its been since November of 2008.

However, it's not all doom and gloom for homebuyers in the Triangle, according to mortgage broker Barb Multari of Pathway Mortgage Group.

"The rates are up a little, it is going to cost more on a monthly payment, but I'm talking with a segment of people who are thinking that there's going to be a crash, and so they're waiting," Multari said. "But we aren't going to see that here in the Triangle market because so many people are moving here."

"We're gonna see time on market increase for houses and we're gonna see some more opportunity for people to get in," Multari said. "And I think we'll see a little bit of a cooling off of the blistering pace home values have been on."

Thomas Babb at Triangle MLS said the median price of a home is sliding downwards a little bit.

"It's looking like the market is beginning to slow some, but the Raleigh housing market is still very strong," Babb said. "The number of showings going down means ultimately people aren't seeing enough houses for that pending number to stay up, thus directly less close sales, cause less people are bidding for houses because less people are seeing houses."

Loan officer Mark Wohlschlaeger at Movement Mortgage said, "a lot of these folks had been out there, and you put in an offer on a home and there's 30 other offers. So now, you're in a situation where there's not gonna be 30 offers." He added, "There may be five other offers, you're still competing, but it's so much higher likelihood of being able to come away with a home at this point versus some of the other times."

Wohlschlaeger said that now is the time for homebuyers to act.