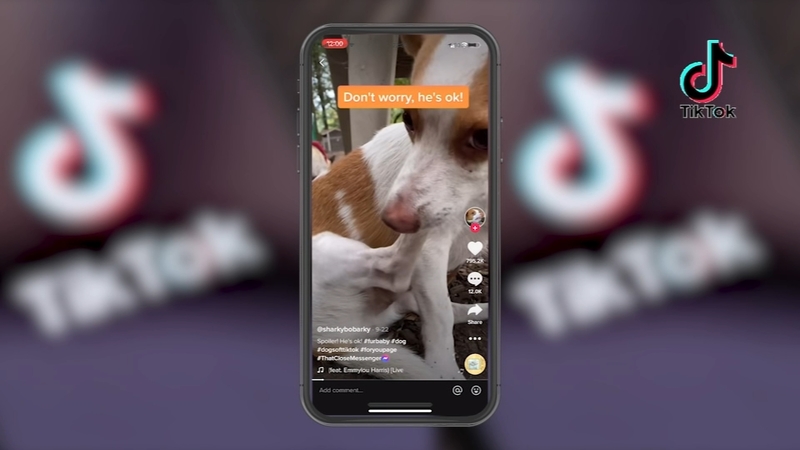 RALEIGH, N.C. (WTVD) -- Jean Mosher loves her dog Jaqweenie and thinks of him as family.

The chihuahua-russell terrier-beagle-etc mix was a stray for the first year of his life, Mosher said, until she and her husband adopted him through the foster program Saving Grace. He's been with them for three years.

"I saw him there and it was just love at first sight," Mosher said. "Also the thing I liked about him is he just kind of looks a little bit like a jerk--and he actually is a little bit of a jerk--and I just like his spunk. And I just knew even if this is the meanest dog ever, I need him."

What makes Jaqweenie so unique is his mouth deformity--a combination of an underbite pushed to one side. Mosher said when she adopted him, one of his canines was sticking through the roof of his mouth.

"We could see a hole, and that must have been painful," Mosher said. "We had two vets tell us, 'oh, it's fine,' but then it just seemed not right to me."

Mosher brought Jacqweenie to a canine dentist in Durham, who recognized the problem was severe and did an MRI--finding that the tooth was wearing down the bone and was in danger of puncturing into his sinus cavity.

The dentist pulled the tooth and now Jacqweenie's smile is a little lopsided with his tongue hanging to the side, but much healthier.

Mosher said the experience was a lesson in advocacy she had to repeat recently when Jacqweenie got injured at the dog park.

"I went over to check on him and he was just shaking and panting and curling his little paw up and I thought he must have broken the thing," Mosher said.

She said she had trouble finding a vet who could see him because many offices are booked solid due to many people adopting pets during the pandemic. Eventually, she got Jacqweenie an appointment and asked for the vet to check his paw a few times.

The vet found a tiny cut--a "paper cut" that didn't even bleed as Mosher described--that was the culprit of Jacqweenie's pain.

"So a very minor paper cut, but she said it must have scared him and really hurt a lot," Mosher said.

The video shows some of Jacqweenie's post-injury behaviors, like panting and licking his paw. Mosher said the experience showed her the importance of recognizing her pet's pain signals--which she said aren't always obvious.

"Their eyes might look a little different, it's, there's so many. There's so many things just to be aware of," Mosher said.

Other more obvious symptoms include panting, licking a particular spot, shaking, unusual aggression, or wanting more or less attention than usual. Mosher said the most important thing to do is to watch for behavior that is atypical to your dog in particular.

"Anything that you think is unusual for your pet, it's best to find someone to get a better look at it," Mosher said.

And after both experiences, she added it's important to advocate on behalf of the pet, seek multiple opinions or ask for a second examination.

"I think it happens with people where sometimes the easiest answer is, 'oh it's in your head'" Mosher said. "You have to be an advocate for them because they can't talk."

Jaqweenie is also an advocate for many human and dog causes--using his fame and partnership with Bark Box to promote LGBTQIA+ advocacy. Mosher also said he marched with Black Lives Matter all over the country in 2020--his bandana was made by a neighbor of Breonna Taylor.
Report a correction or typo
Related topics:
pets & animalsraleighdogstiktokveterinariandoginstagramviral
Copyright © 2022 WTVD-TV. All Rights Reserved.
TOP STORIES
Gas prices decline in Raleigh but experts worry about meaning of dip
Sticker shock for young would-be renters as apartment leases spike
Large police presence on Shanda Drive in Raleigh
Man dies hours after shooting at Raleigh gas station
Grandfather of woman shot by Fayetteville police searches for justice
What to know if your flight gets canceled or delayed
Raleigh City Council adopts 'social districts' ordinance
Show More
Raleigh woman recovering, arrest made in San Diego shooting
Couple fined $1,500 for parking in own driveway
Creedmoor rallies around family that lost everything in house fire
DHS warned of 'heightened threat environment' before parade shooting
Parents of late NFL star Demaryius Thomas reveal he had Stage 2 CTE
More TOP STORIES News