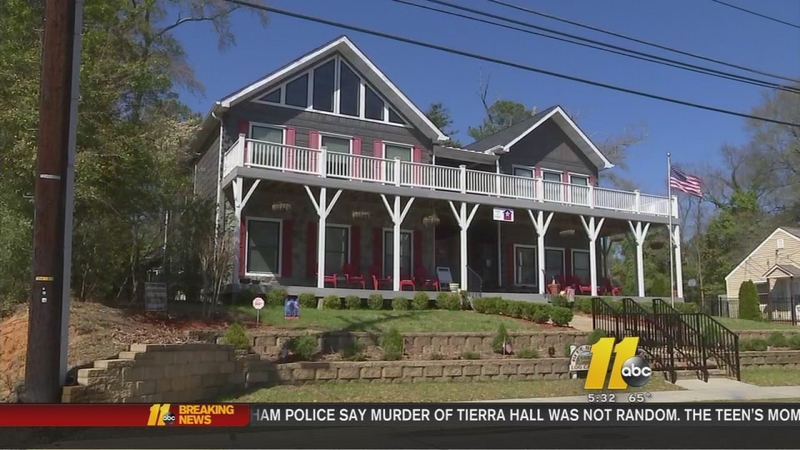 FAYETTEVILLE (WTVD) -- On Monday morning, a group of female veterans gathered around a huge table at the Jubilee House and began to brainstorm ways to ensure what happened last week would never happen again.

The power and water had been shut off in the massive Langdon Street home for three days. The transitional house for women operated via a nonprofit struggling financially was six months and nearly $6,000 behind in utility bills.

People read about it and saw it on the news. A hefty deposit is still owed, but they paid the majority of the bill.

"They were just really inspired to make a difference for women veterans," said Barbara Marshall, director of the nonprofit overseeing the Jubilee House.

Last week's incident was the latest troubling news for the home that provides comfort and resources to female veterans and their children who are getting back on their feet. Since the unveiling of the new house on Langdon Street during a 2011 episode of ABC's Extreme Makeover Home Edition, between 300 and 400 women and their kids have been assisted, said Marshall.

But it hasn't been enough.

The local utility company, aware of children and extreme cold in recent months, decided not to cut-off power to the facility on several occasions.

"We have been working with her," said Carolyn Justice-Hinson, a spokeswoman for PWC. "Part of consideration on this has been the weather."

"We wanted to do everything we could to avoid that [cutting off utilities]," she continued.

"We own houses that are used for tax exempt purposes and we've dialogued with the county or the city about possibly allowing those properties to be exempt," Marshall said. "That costs us probably about $2,500 to $3,000 that had to be paid right around September of last year and that monies would have gone toward our utility bill but it had to be used otherwise."

Last year was also the year the state launched an investigation into alleged misuse of funds and operational practices. (Read more here.)

A spokeswoman with the Secretary of State's office said Monday that the investigation is ongoing, but declined to provide further details.

Marshall said her focus remains on raising awareness about the mission of the organization, in hopes of gaining more community support.

"The biggest battle I really believe is ensuring our community understand what it means to reach out to women veterans and help get them back in the game," she said. "I'm not sure if we fully understand that."

Veterans standing behind the Jubilee House

Marshall said she is now consulting with other transitional homes to take a look at their operational models, many that include some sort of contribution from temporary residents.

"When you're a 501 c3, there's a lot of regulations," said Doris McDaniel, a veteran who's been staying at the Jubilee House for the past several months. "Dr. Marshall probably got somewhat overwhelming."

McDaniel was one of the veterans at the table Monday morning, coming up with ideas to fundraise for the Jubilee House. Those ideas included selling produce from an organic garden on the grounds, opening a thrift store in the home, and sponsoring a Walk-A-Thon.

"We definitely need [community] support," said Sandra Williams, an Army veteran and volunteer mentor at the Jubilee House. "So if anyone wants to contribute materials to make this happen, it would be appreciated."

Williams, a social work major at Methodist University, said she has contributed to Jubilee House utilities, and looks forward to helping it gain a firm financial footing.

"Whenever I pay my PWC bill, I donate. I pay some money on this PWC bill, as well," said Williams. "Because I'm a veteran and there but for the grace of God."

Marshall said it's that type of heart that allows her to maintain faith in the Jubilee House's future.

"I'd look at that and find the inspiration to know that things will go on," she said.

"She [Marshall] started a vision that took off quicker than she though it was going to take off," said McDaniel. "As veterans we need to get together with Dr. Marshall and rally behind her."