By Wednesday, the donations totaled $178,000 from about 9,800 donors, the hospital tweeted.
CNNWire
By Amir Vera and Taylor Romine, CNN 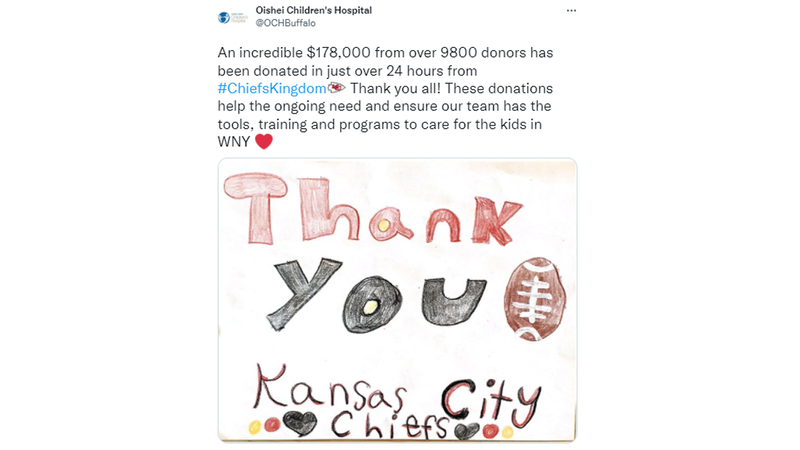 BUFFALO, New York -- Buffalo Bills fans -- known as Bills Mafia -- are typically the ones making donations after a game, but after the Bills lost 42-36 to the Kansas City Chiefs in an epic AFC divisional round Sunday, Chiefs fans decided to step up to the plate.

Chiefs fans began donating Tuesday to Oishei Children's Hospital in Buffalo, New York, in $13 increments, the hospital tweeted. The $13 contributions represented the 13-second drive the Chiefs made to send the game into overtime.

An incredible $178,000 from over 9800 donors has been donated in just over 24 hours from #ChiefsKingdom Thank you all! These donations help the ongoing need and ensure our team has the tools, training and programs to care for the kids in WNY ❤️ pic.twitter.com/wWXvDXxjXF

"Thank you all!" the hospital tweeted. "These donations help the ongoing need and ensure our team has the tools, training and programs to care for the kids in WNY [Western New York]."

The Chiefs will take on the Cincinnati Bengals in the AFC Championship game on Sunday.

The Bills Mafia is known for making donations after games for various reasons, sometimes to make a point. In December, the Bills Mafia began making $17 donations to the Buffalo nonprofit VIA: Visually Impaired Advancement after their 33-27 overtime loss against the Tampa Bay Buccaneers, according to CNN affiliate WKBW.

The donations were made as a way to troll the referees, who fans felt "missed calls against the Tampa Buccaneers, including two on (Bills wide receiver) Stefon Diggs in the end zone," the affiliate said.

In January 2021, the Bills defeated the Baltimore Ravens 17-3 in the AFC divisional round. The mafia celebrated the win by donating to Ravens quarterback Lamar Jackson's favorite charity, Blessings in a Backpack, because Jackson was injured during the game.

The donations totaled at least $75,000, according to CNN affiliate WLKY.