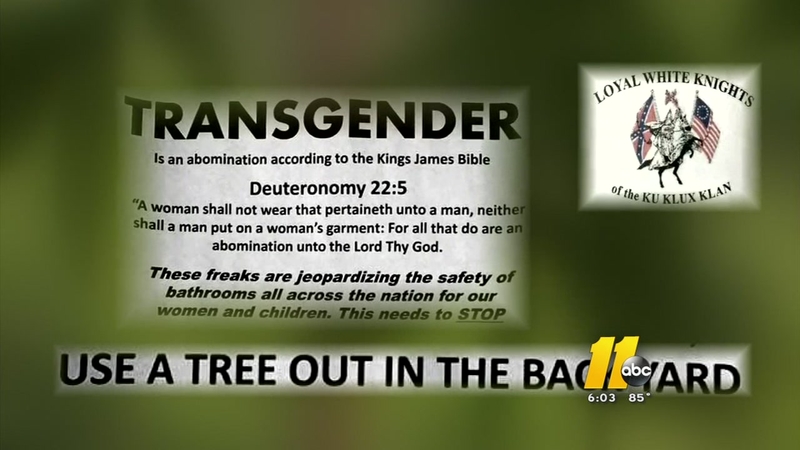 ROXBORO (WTVD) -- Rita Wilhelm found a membership application for the Loyal White Knights of the KKK in her front lawn Wednesday morning.

"It was laying in the yard -- rolled up like a scroll. I was just sad. It made me angry because I thought we had got past all this," Wilhelm said. "I walked all up and down my street and around the block picking them up.

The Air Horn Orchestra protests for the seventh consecutive week.

Wilhelm said using HB2 as a KKK recruiting tool conjures up bad memories of racial tension and division. Memories she does not want passed to her grandson.

"He's 8 years old. He's biracial. I don't want him to have to grow up in a world with hate and violence and racism," Wilhelm said.

Just spoke to a #KKK member. The group is recruiting members who support #HB2. Don't miss my story at 6p #ABC11 pic.twitter.com/kv71b430qj

Loyal White Knight members say the organization is based on Christian ideals.

The group said the LGBT rights, interracial relationships and immigration are against their beliefs. The local group formed three years ago and claims to have 50 members.

With this application, they hope to recruit more to keep House Bill 2 intact.

"People have nothing to be scared of," said Wayne Felker, great Titan of the Loyal White Knights in Roxboro. "We are doing the same thing the NAACP and Black Panthers and everybody else is doing. We're standing up for our race and we have that right."

Roxboro Mayor Merilyn Newell reacted to the fliers and application with this statement.

"The City of Roxboro will not tolerate any actions against citizens by groups who have a mission of racial, sexual, religious or any other kind of intimidation. While these types of groups have First Amendment protections for their recruitment or message, we stand by our city's mission to be a safe and fair place for all who choose to live here."

Roxboro Police Chief David Hess said this in a statement: "We have good people living in Roxboro and Person County who have the right to protection from fear and intimidation. We will protect that right and with the help of our good people and we will send a unified message that love is more powerful than hate."

He added that, "Investigators are working leads to determine who is spreading these deplorable messages of hate and intimidation."

The Roxboro Police are asking the public to provide information of those, who according to Chief Hess "hide under the veil of darkness."

Information leading to charges could receive a reward. Contact the Roxboro Police Department at 336 599 8345."

The KKK group said it is planning a rally in Roxboro in September.