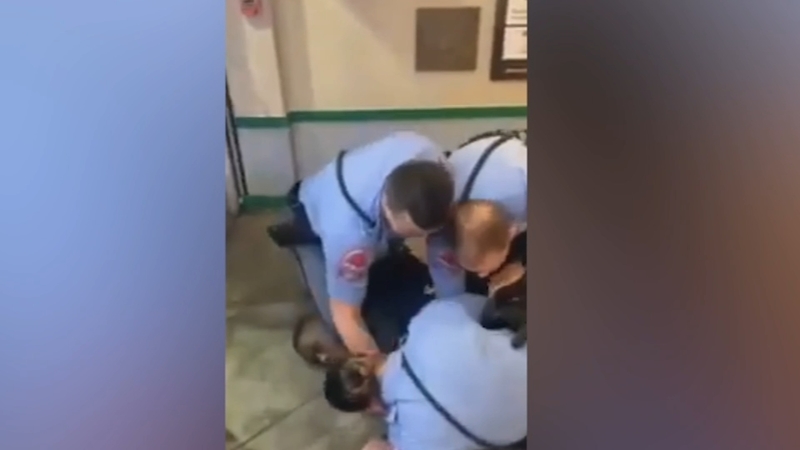 "An already escalated situation got worse," said Hunter Boehme, a North Carolina Central University criminal justice professor and a researcher of police use of force. ABC11 asked Boehme to watch the available angles frame by frame.

First, the Raleigh police takedown of 24-year old Mekhi Lucky. "It took three officers to take down one person, which I know is also a training tactic," Boehme described. "Two officers grab one arm, the other officer arrests. And I understand that. But, then the neck restraint came in."

A Raleigh officer's knee is pressed on Lucky's neck for about 10 seconds. It's a tactic that RPD insisted was not a part of its policing.

A few weeks after George Floyd was killed, Raleigh’s police chief said RPD does not use the type of force seen in Floyd’s arrest (knee to neck restraint). At 11, a police use of force expert analyzes the chaotic moments inside Raleigh Wing Stop earlier this month. #abc11 pic.twitter.com/zoSaUTgKnE

Back in spring 2020, weeks after George Floyd's murder under the knee of a police officer sparked international outrage, then-Raleigh Police Chief Cassandra Deck-Brown was called before the city council to talk about how RPD could modify police policies.

Deck-Brown said RPD was working to officially ban chokeholds and strangleholds. But when it came to knee restraints -- the now-retired chief told the council, "The type of force used against George Floyd, knee to neck, is not used in Raleigh."

Yet it appeared to be used earlier this month at Wing Stop after police responded to a reported fight.

"I believe that is one big factor as to why there is an Internal Affairs investigation. Because of that neck restraint," Boehme said.

The cell-phone videos show a woman at the restaurant, 24-year old Lucretia Godwin, being pushed and tackled by officers who grab Godwin's hair braids during the altercation. RPD says she interfered and assaulted two officers.

At that 2020 city council meeting, Deck-Brown said there was room for improvement in the department's de-escalation policy.

"Based on the video, I do believe that there are other opportunities for de-escalation," Boehme said.

What is most clear from the scene, Boehme says, is the strained relationship that persists between Raleigh police and ethnic minorities.

"Just hearing the citizens saying like, 'This is what they do'." "No matter what neighborhood you're in, race transcends when it comes to perceptions of police."

Raleigh Police Department confirmed that officers in the incident were wearing body cameras that were properly activated. It's unclear when or if that video will be released to the public.