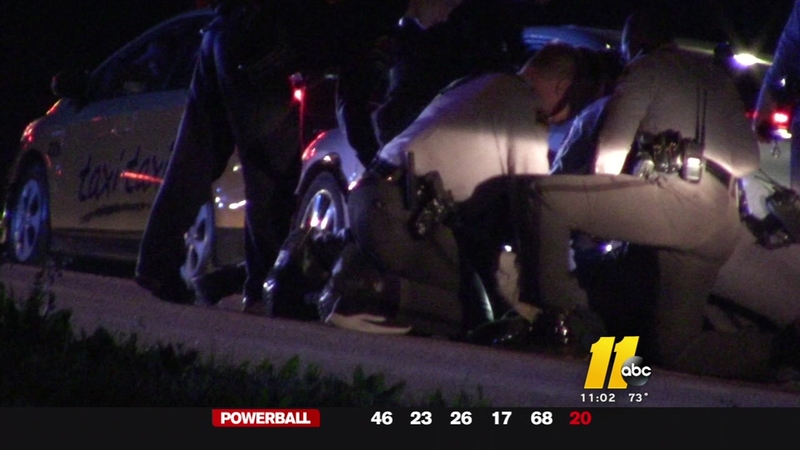 RALEIGH, NC (WTVD) -- Body and dash cam video has been released showing a confrontation between officers and a Raleigh man during an arrest back in April.

The video shows the arrest of Kyron Hinton.

The two state troopers involved in the arrest -- Tabitha Davis and Michael Blake -- as well as Wake deputy Cameron Broadwell, have been charged with assault with a deadly weapon.

The NC NAACP responded to the video release in a news conference Wednesday afternoon.

"I don't believe the conduct coming from a law enforcement officer was conduct becoming of an officer," said the Rev. Anthony Spearman of the NC NAACP. "There was a very clear element of dehumanization and the dehumanizing element did not come from Mister Hinton."

Hinton was not present at the news conference.

In response to the video release, Raleigh Police released a statement, saying in part that "as with any situation where a citizen is injured, this matter is of great concern."

In response to the three law enforcement agency videos that were released today to the media, the Raleigh Police Department issued the following statement: @RaleighGov pic.twitter.com/m5uviyRBjF

"Some say that Jim Crow is over and I'm here to tell you that it's still in our midst," Spearman said.

It also stated that Broadwell assaulted Hinton with his hands and a police K-9, causing injury that resulted in Hinton's hospitalization.

"No one knows what Kyron has been through," said Diana Powell, of Raleigh-based Justice Served. "If law enforcement is there to protect and serve, they didn't do that that night, and for him now to process this mentally, spiritually and physically, that is a tough battle for him."

Dashcam and audio of the Kyron Hinton incident

Hinton admits he was drunk and waving his hands that night, upset because he had just lost money at a sweepstakes parlor.

"I had been drinking and had a crisis that night but I didn't do anything to law enforcement and I was no threat. And, again, the video will show that," he told ABC11 last week.

The three police agencies at the scene of the arrest didn't object to the release of the dash and body camera video but asked the judge to also authorize them to release audio recordings including police radio traffic and 911 calls.

"Twenty-one bites and several cuts on his skull. The video speaks for itself. It is what lawyers call best evidence." said Portia Rochelle, of the NC NAACP. ""We are watching closely. We are staying awake nobody is sleeping on this."

An attorney for the Wake County Sheriff's Office said he hoped people would watch and listen to all the recordings before passing judgment on the actions of the officers.

"We just would ask that if you do decide to release it that we release all of it," said Paul Gessner. "If you want to ask somebody to put together a puzzle you need to give them all the pieces of the puzzle."
Report a correction or typo
Related topics:
wake countyarrestcrimedashboard camerasdashcam videoofficer chargedpolice brutality
Copyright © 2022 WTVD-TV. All Rights Reserved.
TOP STORIES
Family of man shot by officers on I-440 demands answers
2-year-old shot while sitting in car with mother
At-home COVID-19 test request website goes live 1 day early
Free school supply store opens for Wake County teachers
New law protects you from surprise medical bills
LATEST: NC COVID-19 cases up 80% since last Tuesday
AT&T says it will delay some 5G after airlines raise alarms
Show More
Patio igloos installed at Cary restaurant
Sources: NHL to stop testing asymptomatic players, staff for COVID-19
Omicron surge hasn't peaked nationwide: US surgeon general
Cold case team shines new light on betrayal of Anne Frank
Monthly tax credits end, force some NC families to make cuts
More TOP STORIES News