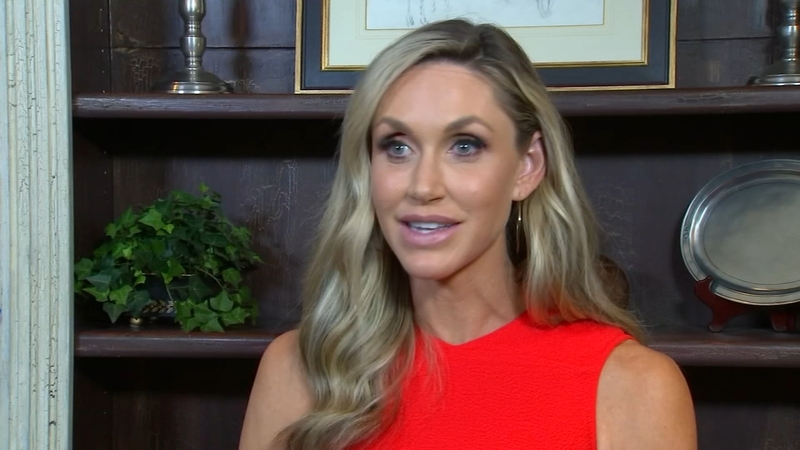 NEW HILL, N.C. (WTVD) -- Stumping for her father-in-law at a Wake County farm on Monday, Lara Trump called the election the most consequential of our lifetime.

During her remarks at Finnigan Run Farm near Apex, Trump said President Donald Trump is putting the pressure on her to help him win North Carolina, her home state. Lara Trump said the campaign will do just that.

She also told the crowd to go vote, stressing the nation's very future is at stake.

"If Joe Biden and the radical far-left Democrats get control of the White House, really don't know if we can recover America," Lara Trump said, taking aim at Democratic presidential nominee Joe Biden and his running mate, Sen. Kamala Harris, who herself campaigned in Wake County on Monday.

Lara Trump said the president will win another term because he will keep the American Dream alive.

"We have seen incredible things happen in this country," Lara Trump said. "The best economy in the history of America. The lowest unemployment, rebuilding and revitalizing our military, taking care of our veterans."

She then told the audience that she believes Biden and Democrats will turn the country to socialism.

"Free healthcare for illegal aliens coming into this country. Joe Biden wants to raise taxes by $4 trillion," Trump said. "He wants to take away the Second Amendment as well!"

In ABC11's one-in-one interview with Lara Trump, we talked about Democrats' disapproval of President Trump's Supreme Court pick, Amy Coney Barrett, and what they see as a threat to affordable healthcare and abortion rights should she be confirmed.
"I wouldn't be concerned about one individual swaying things," Trump responded. "This is a person that's said she wants to be a Supreme Court Justice for every single American."

ABC11 asked about the recent New York Times article on President Trump's tax returns. The Times reported that Trump is in millions of dollars of debt and has avoided paying taxes after years of financial losses.

Lara Trump said the campaign isn't worried that this latest report could sway some undecided voters and hurt the president's reelection prospects.

"I think people know that President Donald Trump was a businessman before this -- that many, many people have similar-looking taxes with businesses and assets across the country," she said. "It's not surprising to see it come out 36 days before an election. I don't think it sways any voters."

Trump also told the crowd that President Trump is ready for Tuesday night's debate and joked that Biden may fall asleep.