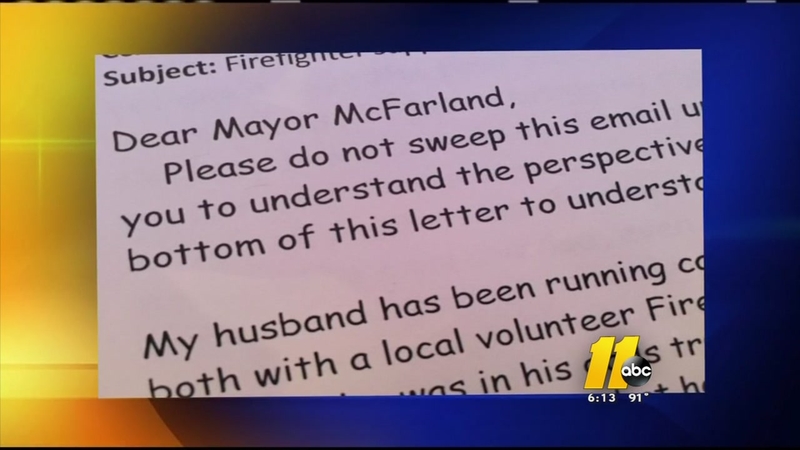 Letter to the mayor

RALEIGH (WTVD) -- Michelle Brantley's husband has been a Raleigh firefighter for 17 years. They have been together for 15 years and married for 10.

In a Thursday letter to Mayor Nancy McFarlane, Brantley says after she married her husband, she realized how different her life had become.

"I knew that if I wanted that man, that I had to accept his passion," she writes in her letter.

All these years later, Brantley feels city leaders do not appreciate the sacrifices her husband makes and it is reflected in his salary. Earlier this week, firefighters lobbied for a 15 percent pay increase. The City Council countered by approved a much smaller 3 to 3.5 percent salary increase.

READ THE FULL TEXT OF HER LETTER TO THE MAYOR HERE (.pdf)

In a letter to Mayor McFarlane, Brantley writes, in part:

"I would hope that (Mayor McFarlane) would put herself in our shoes and try and understand what we go through on a day-to-day basis", says Brantley. "Not only financially, but with not having that other spouse or partner in the home. And then giving their all to the city and their loyalty that they have."

"Throughout the budget process, our office has received a number of emails regarding the concerns of Police and Fire regarding the proposed pay increase," McFarlane told ABC11. "I assure you that I read every email and empathize with all of them. However, I also feel strongly that a one-time bonus that has been suggested for only entry level officers is not the answer and would not address the concerns we've been receiving similar to those outlined in Ms. Brantley's email. Instead, I'm looking for a better, comprehensive solution that addresses all of our city employees, especially our first responders.

"The city is currently in the process of completing a comprehensive study of its compensation system. This study will identify problems in our current system and produce recommendations that reflect balanced solutions based on data to improve the cities compensation system - including salary and benefits - to establish a system where our employees are compensated appropriately for their work and expertise," the mayor added.