LGBT activists call for no interference with Charlotte ordinance 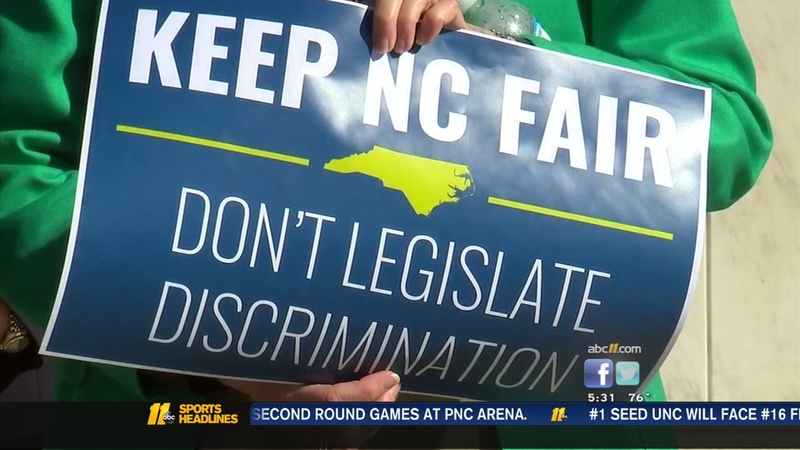 RALEIGH (WTVD) -- Activists in the LGBT community held a news conference at the Legislative Building in Raleigh Thursday, calling for the General Assembly not to interfere with Charlotte's LGBT anti-discrimination ordinance. The ordinance allows transgender people to use the bathroom of their choice, men's or women's, in restaurants, stores, and other places of public accommodation.

Charlotte approved the measure in February, and immediately there was talk of a special session to prevent the ordinance from taking effect.

LGBT advocates said they called the press conference Thursday in response to Republican lawmakers who have been generating support for a special session.

In response to Thursday's news conference, Senate Leader Phil Berger put out a news release referring to the group as a "political correctness mob" "calling for men to share public restrooms with women and young girls" which he then tied to North Carolina Attorney General - and current Democrat gubernatorial candidate - Roy Cooper.

"Now that he's done pandering to far-left primary voters, expect the first of many Roy Cooper flip-flops, accompanied by a dramatic announcement that he will do his job and finally stop this illegal and dangerous policy of forcing women and girls to share their bathrooms with grown men."

Cooper's spokesperson at the Department of Justice told ABC11 Thursday that local district attorneys were advised by Cooper's office in February that they have the power to enforce state criminal law which trumps any local ordinance.

Sen. Berger's Deputy Chief of Staff, Amy Auth, tells ABC11 the letter from Cooper's staff to local DA's was in response to Berger and other senators' letters to Cooper, asking for his clear position on this issue.

"Rather than address legislators' concerns, he twice punted his responsibility onto local prosecutors," Auth said.

Lawmakers have not set a date for a special session. House Speaker Tim Moore has only said he has the three-fifths majority support from his supporters to call one.

Thursday, the LGBT advocacy group Equality NC invited members of the LGBT community, a Charlotte city councilman, and small business owners to talk about why they support the ordinance.

One transgender woman from Charlotte said she's been physically assaulted and fears for her safety. She said she's been using a woman's restroom for years, and sees the ordinance as a protection for people like her.

"I have no recourse against anybody, and anytime I would raise a complaint, which we don't want to do, we're not out there to cause ripples," said Erica Lachowitz, from Charlotte. "We just want to feel safe."

Speaker Moore and others have voiced their concerns, saying the ordinance would open the door for predators who would take advantage of the policy.

The ordinance is set to go into effect in Charlotte on April 1, several weeks before state lawmakers' regularly-scheduled session.