Florida man wrestles his puppy from jaws of alligator: VIDEO 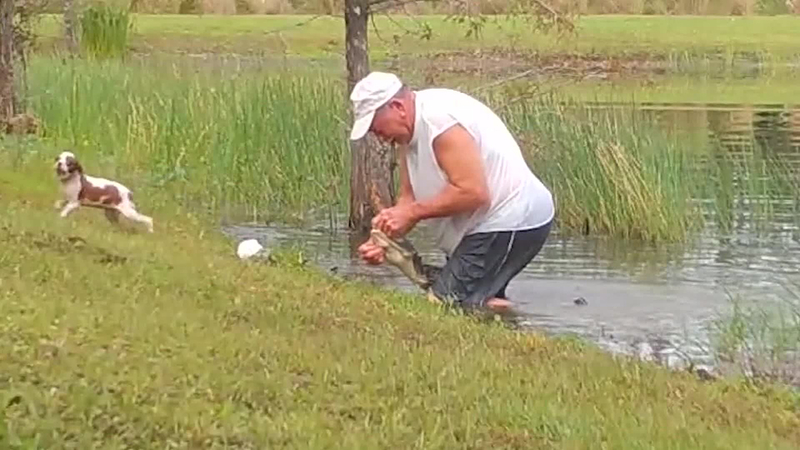 Man rushes into water to save his dog from an alligator

ESTERO, Fla. -- In a dramatic encounter recorded by surveillance cameras, a Florida man chased an alligator under water and rescued his 3-month-old puppy from the jaws of death.

Richard Wilbanks, 74, of Estero ran into his backyard pond, wrestled the gator above surface, and pried its jaws open to free Gunner, his Cavalier King Charles spaniel.

"We were just out walking by the pond," Wilbanks told CNN, "and it came out of the water like a missile. I never thought an alligator could be that fast. It was so quick."

He said adrenaline or instinct kicked in, and "I just automatically jumped into the water."

Holding the alligator wasn't so tough, but prying open the jaws was "extremely hard," he said.

Wilbanks said his hands were "chewed up," and he went to a doctor for a tetanus shot.

Gunner had one puncture wound in his belly and did fine after a trip to the veterinarian's office.

The rescue south of Fort Myers was caught on camera because of a partnership between the Florida Wildlife Federation and the fSTOP Foundation.

Wilbanks agrees with that mission and he doesn't want the alligator removed from the pond or destroyed.

"They're part of nature and part of our lives," he said.

He still takes Gunner walking, but he keeps the puppy on a leash -- and 10 feet from the pond's edge. "Our pets, they're just like family to us," he said.
Report a correction or typo
Related topics:
pets & animalsfloridaanimal rescuedogu.s. & worldalligatorcaught on camerapuppy
ANIMAL RESCUE
Wis. hunters set tangled bucks free instead of killing them: VIDEO
VIDEO: Sea lion gets help after somehow making its way onto freeway
Dog buried in snow, rescued after being swept away in avalanche
Officers remove tire stuck on elk's neck for years
TOP STORIES
Child care program available in Wake County for $30
LATEST: Testing centers opening on delay Monday
Family demands justice after 23-year-old woman found dead after date
5 tax changes that can boost your refund this year
Woman finds $3M lottery prize in her spam folder
Triangle Restaurant Week returns to highlight local small businesses
School closings and delays
Show More
Fauci optimistic omicron will peak in February
Many seek N95 masks amid high COVID cases
GoRaleigh bus crashes on Glenwood Avenue
After the omicron wave, what's next for the COVID pandemic?
One person injured in Raleigh shooting, police investigating
More TOP STORIES News