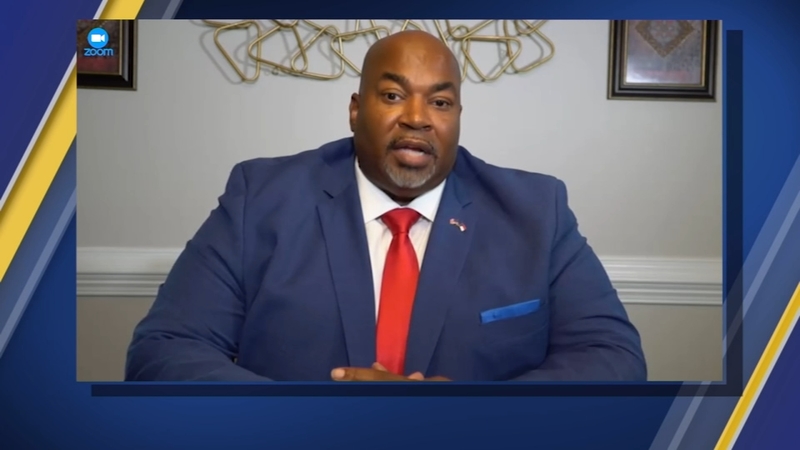 It's focused on what he said during an event in June. The video emerged this week.

'There's no reason anybody anywhere in America should be telling any child about transgenderism, homosexuality, any of that filth," he is heard saying in the video. "Yes, I called it filth. And if you don't like that I called it filth, come see me and I'll explain it to you."

Robinson also criticized the controversial Critical Race Theory during his June speech at Asbury Baptist Church in Seagrove. He went on to say education is not a political issue, but rather a spiritual one.

The comments prompted the Human Rights Campaign (HRC), the nation's largest LGBTQ+ civil rights organization, to call for his resignation.

Robinson doubled down on his comments in an interview with ABC11 on Friday.

"There is material out there that is pushing these issues and teaching our children about these issues," he said of alleged sexual content being taught in schools.

However, he said he wasn't talking about equality when it comes to sexual orientation.

He did not mention a specific book title.

Gov. Roy Cooper's office on Friday sent the following statement to ABC11 about the video: "North Carolina is a welcoming state where we value public education and the diversity of our people. It's abhorrent to hear anyone, and especially an elected official, use hateful rhetoric that hurts people and our state's reputation."

"We are calling on Lieutenant Governor Mark Robinson to resign for his disgraceful, hateful statements directed at LGBTQ+ people," the Human Rights Campaign's statement said. "If Lt. Governor Robinson still doesn't understand how anti-LGBTQ+ rhetoric is received in North Carolina, he should ask former Governor Pat McCrory. This is not the first time Robinson has shared his discriminatory views, but it should be the last time he gets away with it as an elected leader. North Carolinians deserve better than these dehumanizing comments. This incident only reaffirms the serious need for comprehensive non-discrimination protections that would outlaw discrimination and make North Carolina a safer place for LGBTQ+ people to live."

Democrat Jeff Jackson, who is running for U.S. Senate, called on Robinson to resign over the comments made on the video.

"It is our duty to stand with the LGBTQ+ community in the face of this kind of hatred," he said in a statement. "These comments are abhorrent. To hear this from a member of such a high office signals to countless folks that they're unwelcome in our state."

"There is no place for hate in North Carolina," Attorney General Josh Stein said in a statement. "Every single person in our state deserves respect -- not only because it's right, but because it's necessary to build the kind of future we want for North Carolina."

"These words are repugnant and offensive. The role of a leader is to bring people together and stand up for the dignity and rights of everyone; not to spread hate and undermine their own office," said Andrew Bates, White House deputy press secretary.

Robinson was thrust into the national spotlight in 2018 when he gave an impassioned speech about gun rights at a Greensboro City Council meeting.

"What I want to know is when are all of you going to start standing up for the majority?" he said at the meeting. "Here's who the majority is. I'm the majority. I'm a law-abiding citizen who never shot anybody. Never committed a serious crime and never committed a felony. I've never done anything like that. But it seems like every time we have one of these shootings, nobody wants to put the blame where it goes which is at the shooter's feet. You want to put it at my feet."

Video of the speech went viral on social media.

In 2020, he was elected North Carolina's first Black lieutenant governor, even though several controversial social media posts surfaced publicly during the campaign.