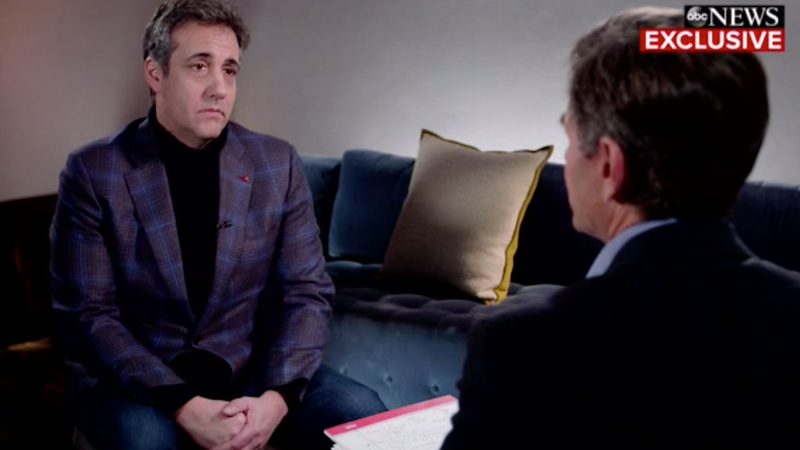 Michael Cohen, the president's former personal attorney and fixer, said Donald Trump directed him to make payments to two women who said they had affairs with the then-candidate because Trump "was very concerned about how this would affect the election."

George Stephanopoulos: Michael, thank you for doing this.

Stephanopoulos: Emotional day in court yesterday, and I was struck by that line you had ... you said you felt like you had your freedom back.

Stephanopoulos: How does it feel today?

Cohen: Like I have my freedom back. Though I have to be honest. It has been very rough to be before the court with my family in attendance, my mother, my father, my wife, my children, my sisters, my brother, my niece, cousins, friends, it was ... ummm, it was a very rough day.

Stephanopoulos: And then you wake up today, and the president is tweeting from very early in the morning several different things ... what struck me most is his claim that you agreed to this plea deal for this reason he said, "Those charges were just agreed to him in order to embarrass the president and get a much reduced prison sentence."

Cohen: I know which tweets you are talking about. First of all, it is absolutely not true. I did not do it to embarrass the president. He knows the truth. I know the truth, many people know the truth. Under no circumstances do I want to embarrass the president of the United States of America. The truth is, I told the truth. I took responsibility for my actions. And instead of him taking responsibility for his actions, what does he do? He attacks my family. And after yesterday, again being before the court and taking the responsibility and receiving a sentence of 36 months, the only thing he could do is to tweet about my family?

Stephanopoulos: He said in the tweets and repeated in an interview later on that basically he says -- his claim -- you are lying about him to protect your wife, to protect your father in-law.

Stephanopoulos: You lied for him for a long time.

Stephanopoulos: He is saying very clearly that he never directed you to do anything wrong. Is that true?

Cohen: I don't think there is anybody that believes that. First of all, nothing at the Trump organization was ever done unless it was run through Mr. Trump. He directed me, as I said in my allocution and I said as well in the plea, he directed me to make the payments, he directed me to become involved in these matters. Including the one with McDougal, which was really between him and David Pecker and then David Pecker's counsel. I just reviewed the documents ... in order to protect him. I gave loyalty to someone who truthfully does not deserve loyalty.

Stephanopoulos: He was trying to hide what you were doing, correct?

Stephanopoulos: And he knew it was wrong?

Stephanopoulos: And he was doing that to help his election?

Cohen: You have to remember at what point in time that this matter came about -- two weeks or so before the election. Post the Billy Bush ("Access Hollywood") comments, so, yes, he was very concerned about how this would affect the election.

Stephanopoulos: To help his campaign?

Cohen: To help him and the campaign.

Stephanopoulos: You mention dirty deeds in your allocution yesterday. When you think about it, when you look back, did you know what you were doing?

Cohen: I am angry at myself because I knew what I was doing was wrong. I stood up before the world yesterday and I accepted the responsibility for my actions. The actions that I gave to a man, who, as I also said in my allocution, I was loyal to. I should not be the only one taking responsibility for his actions.

Stephanopoulos: Do you know why you were loyal to him at the beginning?

Cohen: No. No, it was a blind loyalty. It was to a man I admired, but I do not know the answer to it. And I am angry at myself. My family is disappointed that they've taught me, my mother, father, right from wrong. And I didn't display good judgment.

Stephanopoulos: So what do you say to people -- and you know there are a lot of people will be watching who are thinking, "But wait a second, he lied for so long why should we believe him now?" What's the answer to that?

Stephanopoulos: But you pleaded guilty to lying to Congress.

Stephanopoulos: So why should we believe you now?

Cohen: Because the special counsel stated emphatically that the information that I gave to them is credible and helpful. There is a substantial amount of information that they possessed that corroborates the fact that I am telling the truth.

Stephanopoulos: So you're done with the lying?

Cohen: I am done with the lying. I am done being loyal to President Trump, and my first loyalty belongs to my wife, my daughter, my son and this country.

Stephanopoulos: You worked for him a long time. I was around you many, many years ago where you seemed to be having fun.

Cohen: Correct -- there was a lot of fun going on at the Trump organization.

Cohen: I enjoyed working with my colleagues there as well.

Stephanopoulos: When did it change?

Cohen: You know, I can't give you a specific time that it went from point A to point B. It was just a change. I will tell you that the gentleman that is sitting now in the Oval Office, 1600 Pennsylvania avenue, is not the Donald trump that I remember from Trump Tower.

Stephanopoulos: What's happened to him?

Cohen: I think the pressure of the job is much more than what he thought it was going to be. It's not like the Trump organization where he would bark out orders and people would blindly follow what he wanted done. There's a system here, he doesn't understand the system, and it's sad because the country has never been more divisive. And one of the hopes that I have out of the punishment that I've received, as well as the cooperation that I have given, I will be remembered in history as helping to bring this country back together.

Stephanopoulos: If he were sitting in this chair right now, what would you say to him?

Stephanopoulos: Do you think he has ears to hear that?

Stephanopoulos: Was yesterday the hardest day of your life, or is that going too far?

Cohen: It's an understatement.

Stephanopoulos: Yet you feel you've turned a corner.

Cohen: I know I have.

Stephanopoulos: And when you look back at the Michael Cohen who spent 10 years with Donald Trump, what would you say to him on that first day?

Cohen: "What were you thinking? You knew better. You know better."

Stephanopoulos: How does this end for Donald Trump?

Cohen: That sort of gets into the whole investigation right now between special counsel's office, the attorney general's office, you also have the Southern District of New York -- I don't want to jeopardize any of their investigations.

Stephanopoulos: Are you still cooperating?

Cohen: If they want me. I am here and I am willing to answer whatever additional questions that they may have for me.

Stephanopoulos: Right, so you're saying there's certain areas that you can't get into because you're still cooperating with them.

Cohen: Correct. And out of respect for process.

Stephanopoulos: Why do you think President Trump is lashing out against you in such a personal way? Daily, almost now, calling you weak. Calling you a liar. Is he afraid?

Stephanopoulos: Are you afraid of him?

Cohen: It's never good to be on the wrong side of the president of the United States of America. But somehow or another, this task has now fallen onto my shoulders, and, as I also stated, that I will spend the rest of my life in order to fix the mistake that I made.

Stephanopoulos: How are you going to do that?