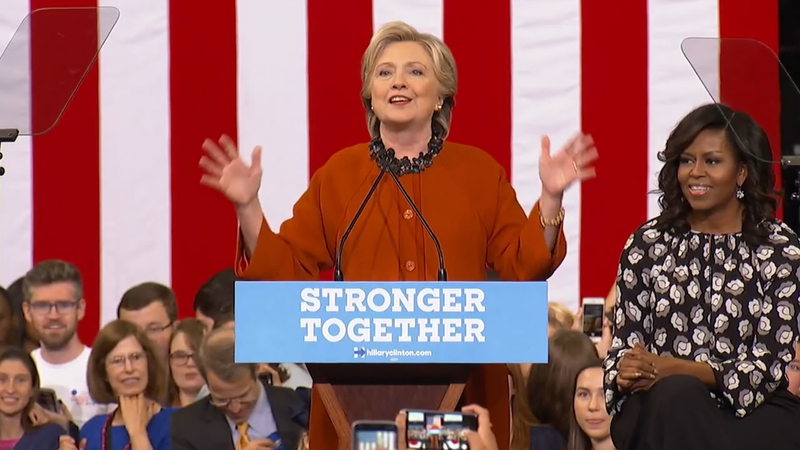 Mrs. Obama offered an impassioned tribute to Clinton, praising her as the most prepared candidate for the presidency ever, adding: "Yes, more than Barack, more than Bill."

The women were unveiling a new $500 million policy plan aimed at reducing bullying. The Clinton campaign said her policy would provide funding to states that develop comprehensive anti-bullying efforts. It would be paid for through Clinton's proposed tax increases on the wealthy.

Mrs. Obama also accused Trump's campaign of trying to depress voter turnout by deriding the election as "rigged." She told supporters that presidential races are decided on a "razor's edge."

"If Hillary doesn't win this election, that will be on us," she said.

The Clinton campaign has described Obama as its "not-so-secret weapon" on the trail as she's crisscrossed the country campaigning for the former secretary of state.
"She has exceeded our expectations in terms of how many events she has been able to do, willing to do. Her team keeps surprising us with additional availability and we can't, from our vantage point, we can't get her out there enough. She's been an absolute rock star," Clinton campaign Press Secretary Brian Fallon said earlier this week.

Obama wowed Democrats with her speech on the first night of the Democratic National Convention, even prompting Clinton to incorporate one of her lines into her stump speech -- "When they go low, we go high."

The first lady has delivered some of the most effective criticisms of Donald Trump, often without even naming him. In New Hampshire last month, she offered a stinging critique of the Republican presidential nominee after a 2005 video surfaced in which he made lewd comments about women.

"This is not normal. This is not politics as usual," Obama said. "This is disgraceful, it is intolerable, and it doesn't matter what party you belong to.

"No woman deserves to be treated this way -- none of us deserves this kind of abuse," she added.

The relationship between Obama and Clinton has evolved since the bruising 2008 presidential primary. During an interview with ABC News at the time, Obama declined to say whether she would vote for Clinton if her husband weren't running for president.

Obama, who has tried to stay out of the political fray during her husband's presidency, enjoys one of the highest approval ratings among Democratic figures in the country. A recent Fox News poll found she received a 59 percent positive rating overall and a 95 percent favorable rating among Democrats.