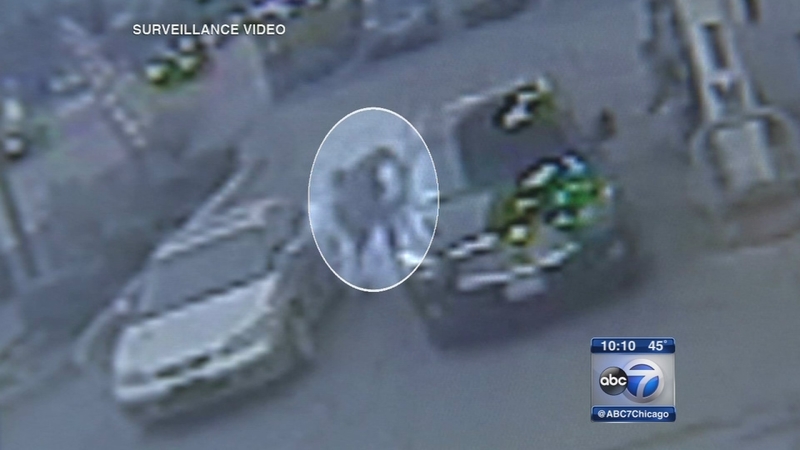 CHICAGO -- A mother has a warning for everyone after a daring daytime robbery at a gas station on Chicago's Near North Side. She was pumping gas with her baby inside her car when the thief struck.

Police say this type of crime is happening more and more often in the city. In this case, it happened in broad daylight on Monday afternoon near the corner of Halsted and Division.

The video from the gas station security camera is a little grainy, so it's difficult to make out the details of the suspect's face or his vehicle, a tan-colored sedan. But it clearly shows the suspect pulling his car up to the where Heather Ward was pumping gas with her 2-month-old baby in a car seat in the back while the suspect opens the door on the other side and grabs her purse and wallet. He then gets back in his car and takes off.

"It's infuriating to know that I was targeted. I'm a mom, and here he is knowing full well, I'm certainly not going to chase him," Ward said.

Ward was on her way to pick up her 3-year-old from preschool Monday when she stopped for gas. She says she was preoccupied with pumping gas and keeping an eye on her daughter.

The suspect was parked behind her for several minutes, apparently scouting out his next victim. He even pulled up next to her once, then backed out, and pulled back closer before crouching behind the vehicle, then going in the car and grabbing her stuff. Ward says she's just grateful he didn't reach for her child.

"I couldn't even think straight because it was so close to my child," she said.

In the aftermath, Ward took to social media to share her story with other moms and warning them to be cautious.

"As widespread of a net as I can cast to let people know, 'hey, this is happening, be on the watch,'" she said.

Ward said after leaving the gas station, the man apparently tried to use her credit card at another gas station in Riverdale. Police are still searching for the suspect.