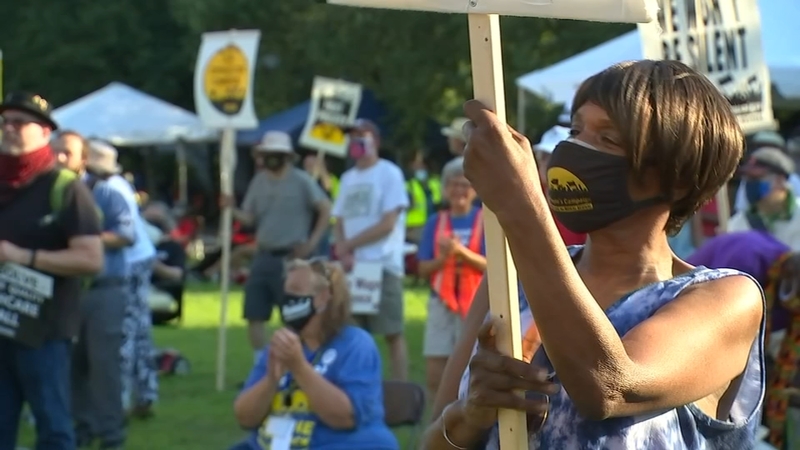 RALEIGH, N.C. (WTVD) -- A rally Monday night on Halifax Mall, dubbed the National Poor People's and Low-Wage Workers Assembly, had been in the works for a while now.

But when organizers saw an ABC11 story a few weeks ago about the plight of residents at the Garner Road Apartments in Raleigh, the tenants' problems became a part of the larger fight for economic justice.

Amid the hundreds who rallied in the heat on Halifax Mall or the thousands watching the national livestream -- ABC11 found a familiar face in the crowd.

"This is my first time being here and I'm really enthused by it -- to see that people really do support us," said Josie Banks, who first appeared on ABC11 during the first week of June -- days after she and her neighbors at 1107 Garner Road were told by the new property owners that the apartment units were being renovated, rents were being raised substantially, and they had until the end of the month to find new places to go.

After the story aired, Raleigh city leaders including Mayor Mary-Ann Baldwin plus Wake County commissioners, nonprofits and realtors sat down with the tenants to talk about housing solutions with the low-income resident facing potential homelessness.

“I’m here to support everyone in the same predicament that we are.”#abc11 • AT 11 pic.twitter.com/SJojlUnxSu

"I'm here to support the people," Banks said Monday, at the rally. "To support everyone that's in the same predicament that we are."

In Raleigh, there are many facing the same affordable housing crunch. ABC11 took the concerns about Garner Road to the city's housing and neighborhood department, which is helping oversee the $80 million affordable housing bond passed by city voters last November.

First question: Where is that money?

"The first round of funding will be used starting July 1, which is fiscal year 2021-2022," said Sophia Ramos, communications analyst for the Raleigh Housing and Neighborhoods Department.

Ramos explained the 5-year rollout for the housing bond begins flowing nine days from now. This first year of bond funding is $24.8 million to acquire and preserve affordable housing units across the city with priority being put on sites near future public transit corridors.

Second question: given the need, is $80 million enough?

Raleigh city leaders set a goal to create or preserve 5,700 affordable housing units by 2026. The new bond funding should mean even more.

In the meantime, Banks and her neighbors are expecting to meet again with city and county leaders June 28. The property's owner, Garner Rd. Apartments LLC, has relented on the June 30 date. Residents say the company has now given them until July 30 to find alternative housing.