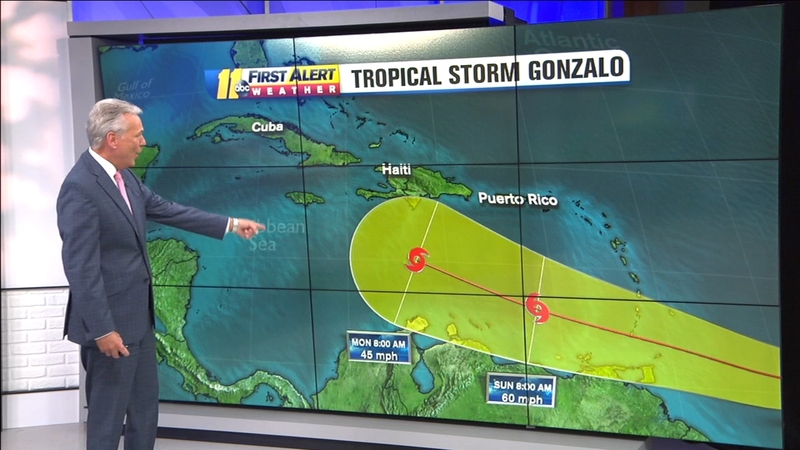 RALEIGH (WTVD) -- Tropical Storm Gonzalo has formed in the Atlantic Ocean, and a Tropical Depression is likely to form soon in the Gulf of Mexico.

National Hurricane Center said Gonzalo has max sustained winds of 45 miles per hour and is moving west northwest at 12 miles per hour.

The system is expected to push into the Caribbean Sea by the end of the week. It's still too early to tell if it will impact North Carolina.

The formation of Gonzalo ended a 10-day lull in tropical activity--Tropical Storm Fay dissolved on July 11 after moving ashore in the Northeast of the United States.

The National Hurricane Center is also watching another tropical wave near western Cuba, which has an 80 percent chance of becoming a Tropical Depression over the next day or two.

The system is currently producing a lot of disorganized showers and thunderstorms throughout the Gulf of Mexico.

An area of low pressure in the Gulf has a high chance of becoming a tropical depression over the next day or two. This will bring heavy rain to southeast Texas Friday and Saturday. pic.twitter.com/JuODRsJyoE

This system will bring heavy rain to Texas late Friday through Saturday. Some watches and warnings could be issued for the Gulf coast of Texas and Louisiana soon as well.

Hurricane Hunters plan on flying into this low late Wednesday to get more information.

If this becomes a tropical storm, the next name on the list this year is Hanna.

The peak of hurricane season is mid-September. So far, this season has gotten off to a record start.