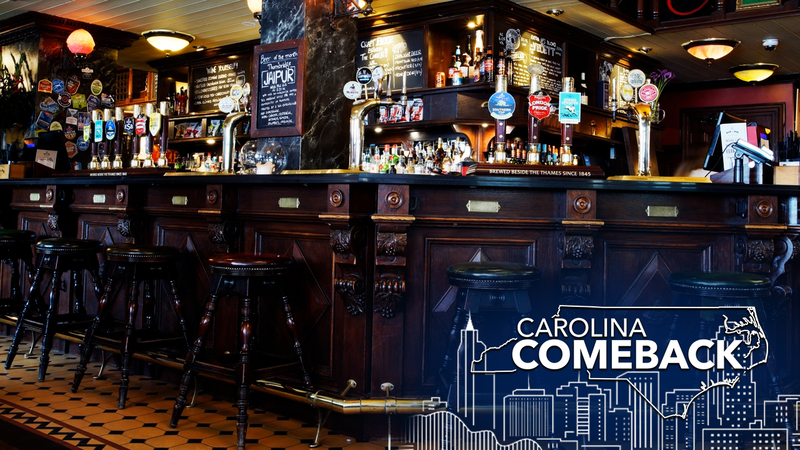 "Who knows if the numbers are going to look any better in three weeks? It seems like we're just being kicked down the road every single day with no light at the end of the tunnel. We need some kind of help," said Zack Medford, who owns four bars in Raleigh and also serves as the President of the North Carolina Bar and Tavern Association.

Medford believes the decision to allow restaurants and hotels to serve alcohol--which Medford says comprises 85% of the bars across the state--but prohibit bars and taverns from doing so is unfair.

He is pleading for some flexibility--whether it would be to offer to-go drinks or outdoor seating--to bring in some much needed-revenue.

"We haven't had any revenue, whereas restaurants have the ability to do curbside, to-go food sales. Bars havent had any kind of luxury like that. We have no way to bring any kind of revenue in until we open our doors," said Medford.

While Medford did apply for and receive a PPP loan, he said there are a lack of viable options to keep many businesses afloat moving forward.

"We're pretty much out of options outside taking on extra debt in the form of EIDL loans (Economic Injury Disaster Loan) and other loans granted by the state. When you don't know when your business is going to open its doors the next time, it's really hard to stomach taking on even more debt," Medford said as he sat inside one of his bars, Isaac Hunter's Tavern, on Fayetteville Street in downtown Raleigh.

Gyms have also been unable to re-open, though some have found alternate revenue streams by offering virtual classes.

"It brings in some revenue. The other thing that we did is when we found out that we would have to close is we started a bike rental program," said Delvin Burton, who co-owns CycleBar West Cary with his wife, Dr. Charlotte Jones-Burton.

He says they initially closed down the studio a week before the state mandate to do so, citing the need to protect staff and customers.

"From a business standpoint, it's becoming extremely difficult. By the time we get to the 17th, it will be four official months that I've been closed," Delvin Burton said.

Even when they re-open, Burton said he doesn't expect to return to normalcy.

"There's an expectation that we won't be at full capacity, won't probably even be at half capacity," said Burton, noting social distancing requirements are likely to be included in the next phase of re-opening.

A further concern: residents nervous about returning to crowded businesses.

"There's a runway that's needed. So you come back into business and it's not like you open your doors and everybody comes busting through your doors and your ridership and membership is right back where it was supposed to be," Burton said. "You know have to gradually build that again. You have to make sure people are confident in the safety measures you put in place. So you're looking at another 30 to 60-day period just to get back into the swing of things. The impacts have been devastating."

It's a concern shared by Denise Watkins, whose family owns Sky-Vue Skateland in Rocky Mount.

"We were shut down during our most profitable time of our season," said Watkins.

They've been in business since 1958, and Watkins said she's heard from customers asking when they can return.

"Some of these kids are with me every week... this is their thing," said Watkins.

She was not surprised by Cooper's decision to delay the reopening, based off the increase in cases and hospitalizations.

"We did apply and receive PPP loans, which we have been able to pay our staff while we've been closed. That runs out in the next couple of weeks," said Watkins, who runs the business with her brother.

She says she has two part-time employees, who they've committed to paying.

"I feel they need to be paid," Watkins said. "It's not enough for them to draw unemployment. They need some assistance. So, I told them from the beginning that I would continue to pay them for at least our minimal hours each week. But I would have never thought--we're now in Week 15. That is a long time."

Although Watkins and her family have been able to find ways to conserve money, there are other fixed costs--such as insurance--that they will have to pay.

In anticipation of reopening, Sky-Vue Skateland has signage and markings to enforce social distance, and have stocked up on hand sanitizer. Watkins also said they plan to take extra measures to enhance cleaning protocols. She added that their size--13,200 square feet--would make social distancing feasible.