How North Carolina's COVID-19 response, policies compares to other states 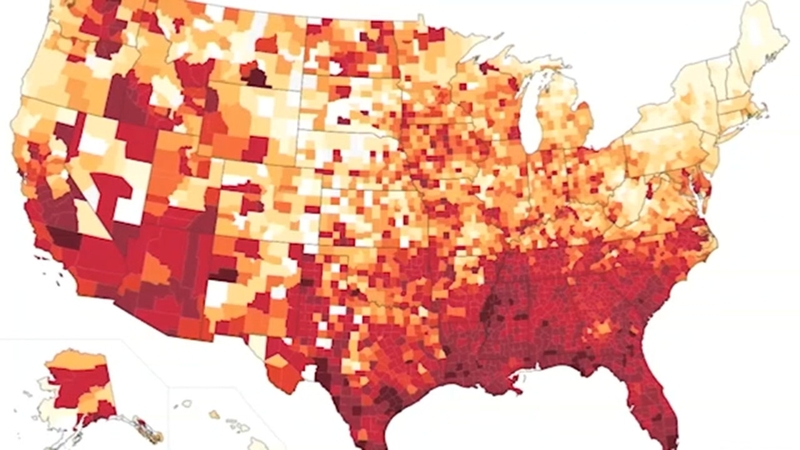 RALEIGH, N.C. (WTVD) -- With well over 1,000 new COVID-19 cases added every day in the month of July, health leaders continually stress the "three w's" when it comes to prevention: wearing a mask, waiting six feet apart and washing hands frequently.

And while Gov. Roy Cooper ordered North Carolinians to wear masks while in public places in late June, data suggests that the combination of prevention techniques is what may help slow the spread, rather than any measure in isolation.

In North Carolina, the percentage increase of new COVID-19 cases in North Carolina hovered between two and four percent daily before the Executive Order requiring face masks went into effect on June 24.

While that rate of increase dipped slightly in the weeks following the order to one to three percent, experts say the reopening of the state has kept the mask ordinance from having a true impact on case counts.

RELATED: NC ranks 7th in U.S. for most COVID-19 restrictions

However, the percentage rate of increase didn't change much in the weeks following the mask requirement, hovering around two to four percent. Only once Newsom ordered bars, indoor restaurants and gyms to close once more did case increases drop to one to three percent.

However, New York's Gov. Andrew Cuomo instituted his face mask requirement when his state was still under a stay-at-home order--and the numbers show a very different story.

In the two weeks before Cuomo's order requiring face coverings on April 15, New York's rate of increase of new cases ranged from three to 11 percent. However, by two weeks later, that rate of increase dropped to one to two percent, and has been at less than one percent since May 8.

Cuomo did not begin lifting restrictions in any regions of the state until May 15, keeping New York City under the stay-at-home order until June 8.

"I think it is somewhat difficult to make direct correlations. One policy in a vacuum is not going to make much of a difference but when you start to include a number of policies designed to reduce the community spread that's when you're more likely to see an effect," said Jennifer Tolbert, the director of state health reform at the Henry J. Kaiser Family Foundation (KFF).

The foundation has been tracking COVID-19 data since the pandemic began.

She said the resurgence of the virus stemmed from states who opened quickly.

RELATED: US coronavirus cases down but deaths surged by 30% last week, according to FEMA memo

Florida and Texas both reported some of the highest increase in cases in the country over the past week, based on KFF data.

The Center for Disease Control said states should aim for a 5% positivity rate. So far, only 18 states meet that goal, according to John Hopkins University data. None of the states with low rates are in the South. Instead, Florida, Alabama, Mississippi all report nearly 20% COVID-19 tests as positive.

Researchers said politicizing mask-wearing early on only worsened this backlash response, but they're hopeful, with Pres. Trump's recent pivot on the issue, referring Tuesday to mask-wearing as "patriotic," will help.

Tolbert said the impact of the high case counts extends beyond these states' residents.

"Even in states where those policies are in place are now beginning to see an increase of cases simply because the virus doesn't respect boundaries," she said.

"Having one state do one thing and another state do something different and the people hearing the message that is very, very different from both of those states don't know who to believe," Benjamin said.

Like Tolbert, he thinks the most influential factor determining the difference COVID-19 cases between states is how they reopened.

"Leadership is everything. Those governors who got out in front of this and provided consistent leadership based on science, based on the numbers have clearly done better than those governors who have been dragged to the reality that this disease is a threat," he said.

While he acknowledged that every community is different, he said everyone needs to be consistently monitoring the COVID-19 data to make the best decisions.