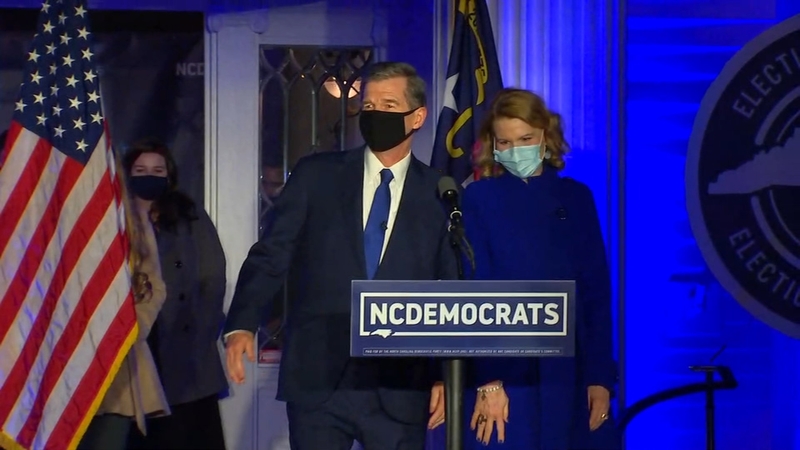 "To the people of North Carolina, thank you so much for electing me as your governor for another four years," Cooper said at a victory speech Tuesday night. "Serving in this office has been the honor of my life."

Cooper this November was banking on the support of voters who approved of his handling of the coronavirus, while Forest aimed to appeal to business owners and K-12 public school parents dissatisfied with the state's slow reopening.

"Serving in this office has been the honor of my life," Gov. Roy Cooper said Tuesday night.

Cooper thanked his family for their support before turning to matters at hand.

"For months, the nation has focused on North Carolina, and it's come down to counting the votes," Cooper said. "I know that there are a lot of important races that are too close to call, and we must let the process work to be sure that all the legal votes are counted."

"North Carolinians have chosen to re-elect Governor Roy Cooper, a fighter for working families who is committed to moving our state forward. Since 2016, Governor Cooper has fought for a better educated, healthier, and more prosperous North Carolina where people can have more money in their pockets and opportunities to live with purpose and abundance. In a second term, Governor Cooper will continue to prioritize raising teacher pay, expanding Medicaid, and strengthening our local economies over corporate tax cuts."

Cooper has seen a steady lead in the polls in recent weeks.

Still, campaign officials were adamant on Tuesday that they were taking nothing for granted.

Indeed, it was Cooper four years ago who upset the incumbent, Pat McCrory, and he did so by only some 10,000 votes.

"Right now we're in a pandemic but Gov Cooper is no stranger to leading the state through crisis," spokeswoman Liz Doherty said. "Hurricanes, flood, as soon as he came in to office he came in to repeal HB2. He is up for a challenge and is a proven leader."

Cooper's campaign has also enjoyed national support, as his 2016 victory marked a bright spot for Democrats among many NCGOP wins.

"You take something like healthcare that's a decision made at the state level," Pete Buttigieg, the former mayor and presidential candidate, said. "You think about any of the issues that are being hotly debated like racial issues and policing that comes down to the local level. So much about taxes, infrastructure and education are decided in those state capitols."