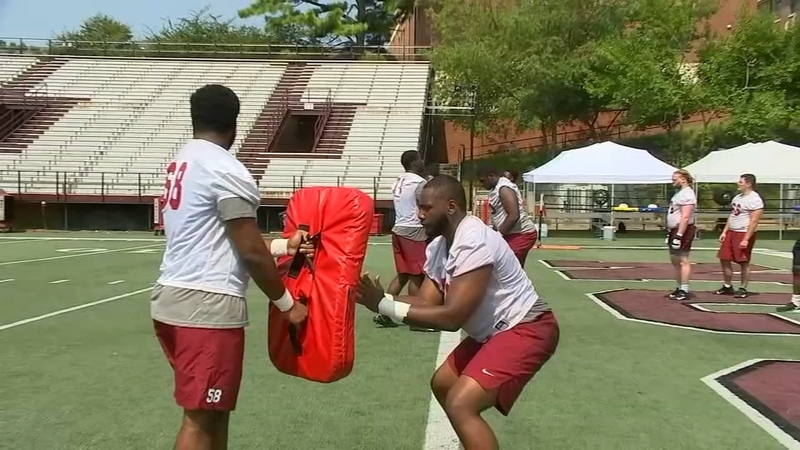 DURHAM, N.C. (WTVD) -- Most college football teams struggled to get through last season while dealing with COVID-19. Some, like NC Central, weren't even that lucky. The Eagles didn't play in the fall and opted out of a makeshift spring season.

That made Saturday a special one on the Durham campus, the Eagles began practicing for the first time since 2019.

"You know it was rough," said third-year head coach Trei Oliver. "They are just so happy to be out here. The guys are bouncing around and have a smile on their faces. When something is taken away from you that your love, once you have a chance to get it back you're definitely appreciative of it."

Like most of the Eagles, if not all, senior wide receiver Ryan McDaniel has a newfound appreciation for a sport that was taken away.

"We've obviously grown together a lot and it just really brought out a passion for football again. It's like you really had to love it to come back and make it through COVID," McDaniel said.

Junior defensive end Jessie Malit concurs, "We really miss those summer workouts and the season, the bus rides. So, yeah, we have a deep appreciation for what it means to be out here."

After things shut down, coach Oliver put together a nine-week plan that not only incorporated getting bigger, stronger and faster, but focused internally.

"It was rough on the guys not being together and doing everything on zoom," Oliver said. "Some guys got quarantined and it was rough on them so the mental health aspect played a major part in our offseason program."

Instead of bonding through game situations, the players and staff had to be creative. McDaniel thinks not playing will actually benefit the young team in the long run.

"COVID was a blessing and a curse. It gave us so much time to grow as a team and we had time to do team activities like we went to a little adventure park. We went on the go-carts. Just a whole bunch of little things that brought us together," McDaniels said.

"We might not have been in the best spot last year but now we have better comradery," said Malit. "We had experience with each other off the field. We know each other a lot better."

Coach Oliver is hoping that translates to wins. Central is picked to finished third in the MEAC preseason poll although the coach isn't buying it, "We honestly expect to be in it when the smoke clears. In November we want to be in it."