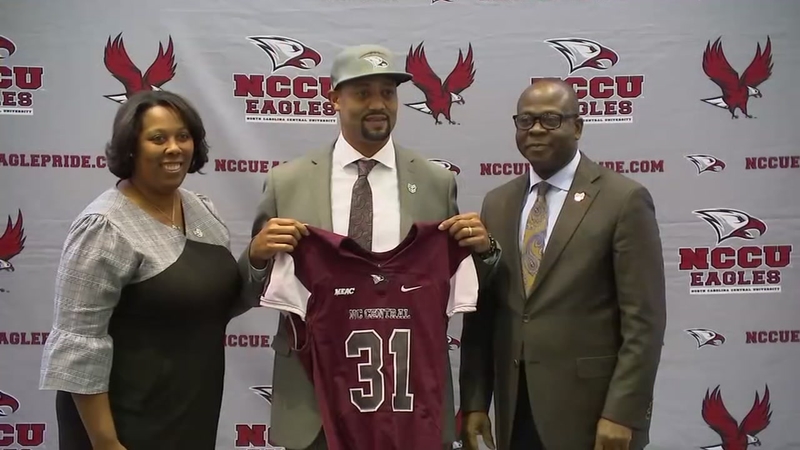 "It's an honor and privilege to be able to lead this institution -- my home -- y'all know how much I love this place," Oliver said at a news conference Thursday.

On paper, Oliver looks to be an obvious choice. A star defensive back at NCCU in the late 1990s, he returned as an assistant coach under Rod Broadway in 2003. He stayed under Broadway's wing all the way until 2016 when he took the DC job in Baton Rouge.

NCCU is thoroughly ingrained in Oliver. He said he still has sports apparel dating to his playing days for the Eagles. His parents are both NCCU graduates -- his father, Colon, played wide receiver for the Eagles in the 1960s and his mother, Evelyn, was homecoming queen.

Even his wife, Yvette, is an NCCU grad.

When it comes to mentors, it's hard to imagine one better than Broadway, a winner of six conference and titles and even more impressively, five black college national championships.

"Coach Broadway, he's a mastermind," Oliver said. "He's a genius, and we keep in touch and talk all the time."

Helping to orchestrate winning on that level and being the conductor are two different things, of course. Oliver must now prove he can be the man in charge, always a big step up.

"I think if we can get the guys to buy in, and understand what we talk about with Eagle Pride, unity and discipline, and just give it their all, the wins will come, championships will come," Oliver said.

It's clear that in Oliver, the Eagles have hired a coach with a winning pedigree.

Got confirmation of Trei Oliver as the new head coach at NCCU. An alum, and as far as longtime mentors go, how can you do better than Rod Broadway. Great looking hire on paper, now we'll find out if he can do the job.

Whether that continues at NCCU, we'll know in a couple years. One thing we'll find out right away though is whether his news conference chops are up to the impossible standard that Broadway set through the years. That may be harder to match than the on-field accomplishments, but we know for sure he absorbed some of Broadway's gift of gab.

"Recruiting is like shaving," Oliver said. "You have to do it every day or you start looking bad."