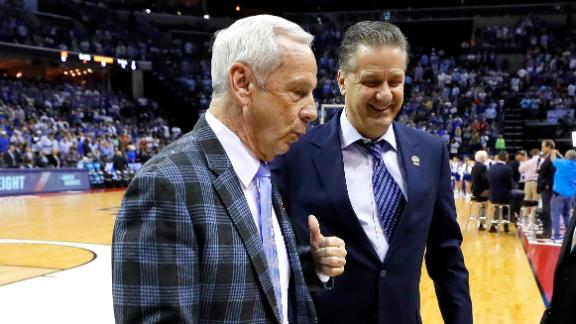 ESPN
By David Purdum
Three powerhouse programs that failed to reach the Final Four this season sit atop some of the first odds to win next season's college national championship in Las Vegas.

The Westgate SuperBook has installed Kentucky, Duke and Louisville as co-favorites, each at 10-1 to win the 2018 NCAA tournament.

After reaching this season's championship game, North Carolina and Gonzaga are in the next tier of teams in the Westgate's odds at 12-1. Kansas and Villanova are also 12-1. Arizona, at 15-1, is the only other team with odds better than 20-1 at the Westgate.

Duke freshman forwards Jayson Tatum and Harry Giles also could be lottery picks. Louisville is the only one of the three early favorites at the Westgate not to have a player projected as a lottery pick in this summer's NBA draft.

UCLA is in a group of teams at 25-1, with star point guard Lonzo Ball having already announced his intentions to enter the NBA draft.

Other sportsbooks are expected to post odds to win the 2018 national championship in the coming days. Next year's Final Four will take place at the Alamodome in San Antonio.