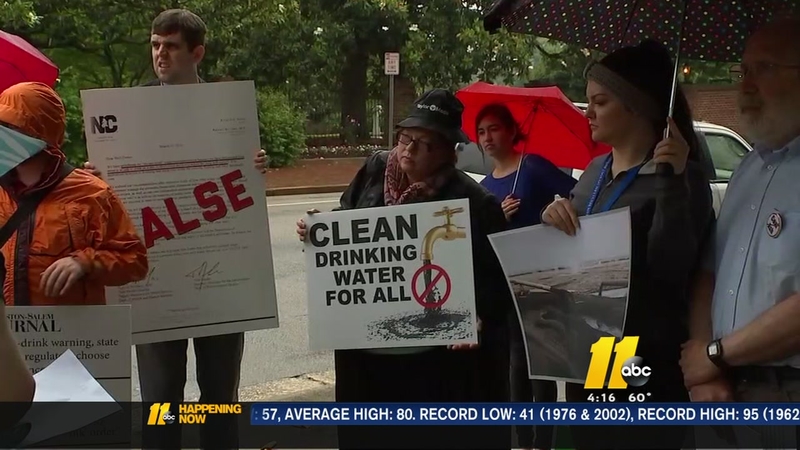 Homeowner living near Duke coal ash pit: The state has failed me and my family. We deserve better than this. #abc11 pic.twitter.com/Ky3kAwVEWI

They say DEQ effectively broke the state law known as the Coal Ash Management Act, which required the environmental agency to come up with a final set of recommendations for each of Duke Energy's 34 coals ash pits by May 18.

The agency did submit a plan for each site and offered the map below to help people understand the plan, but the plan came with the caveat that it would only become "final" in 60 days and a request by the agency to reassess the plan completely in 18 months. 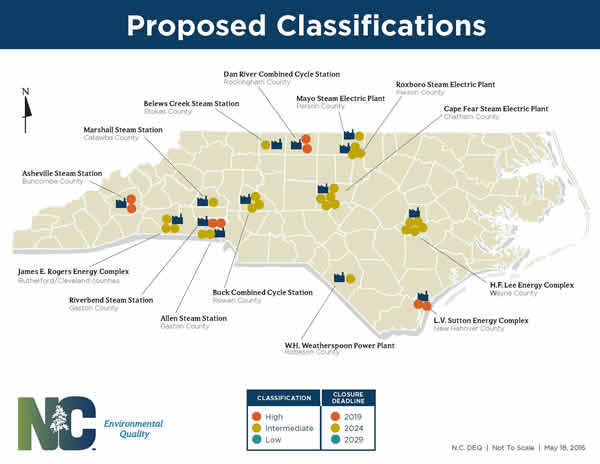 "This is just window dressing," said the Downeast Coalition's Sara Mullins. "It's a serious problem that needs to be addressed. Duke Energy must find alternatives and methods to avoid poisoning other communities. And these elected officials who work for all the people of North Carolina need to do the right thing. Again and again, Governor McCrory's political appointees have bent over backwards to help Duke Energy, holding special dinners, reducing fines, lowering classifications or flip-flopping whether water is really safe or not."

That sentiment was shared by the dozen or more people who live near Duke Energy coal ash pits and came to the Capitol City to voice their concerns Thursday.

Two of the 30+ people who turned out on a rainy day to blast the state's coal ash cleanup plan. Watch #abc11 at 4. pic.twitter.com/etGPVVeyox

Many expressed concerns about the state's decision to reverse its recommendation to many people who live near the lagoons and to whom it had previously sent "do not drink" advisories. ABC11's I-Team did an extensive report on that reversal a few weeks ago, in which state Health Director Randall Williams defended the change of position, saying the "do not drink" advisories had been issued with an abundance of caution the agency no longer felt was necessary. You can watch the I-Team's full interview with the state Health Director below.

Williams said the decision was based on a "consensus" among scientists at the agency but since then, testimony under oath from state Epidemiologist directly contradicts many of the statements Williams made to ABC11 on camera. Williams was appointed to the position of Health Director by Governor Pat McCrory. Williams, who's a gynecologist by trade, ran for mayor of Raleigh a few years back.

"We do not believe that his political appointees should be making life changing decisions that have detrimental health consequences on so many families across our state," said clean water advocate Caroline Armijo.

"Who are the experts that agreed with rescinding the do not drink letters?" asked Amy Brown, who lives in the shadow of one of Duke Energy's coal plants. "Are the experts who told me I shouldn't drink my water the same ones that think it's safe now? Where are the extensive studies I was told the state had done? Where is the new information?"

The state Health Director told ABC11's I-Team that the health agency doesn't have any new data but says it no longer believes the toxins showing up in wells around Duke's coal ash lagoons are harmful. Toxicologists contacted by ABC11 disagree.

Folks who live around the toxic sludge pits say they don't believe the state's new take on the risks. "I look to the state to help me in protecting my children," said Brown. "The state has failed me. Trusting the state and my neighbor, Duke Energy, has proven to be dangerous to our health. We deserve better than this."

Many critics say they feel flat out lied to by Williams and other state officials.

"Dr. Williams, as our state Health Director, has a job to protect public health," said Deborah Graham, another clean water advocate who lives near Duke's coal ash pits. "He knowingly -- he knowingly -- put us in danger. Telling us that it's OK to drink water that his staff previously told us was not safe to drink. Any state health director who doesn't protect public health is incompetent and should be removed from his position."

Graham said she believes Williams put them "in danger" because of a recently released deposition of state epidemiologist Megan Davies.

Davies' testimony sharply contradicts statements Williams made to the I-Team earlier this month. The I-Team reported on the discrepancies when Davies' testimony was released last week. You can watch that story here.

DHHS did not reply to the I-Team's request for another interview with Williams, but the agency did offer this statement:

"The initial recommendations were issued out of an abundance of caution as state experts began to study an emerging public health issue. The state environmental and health departments believe that North Carolina should follow the drinking water standards set by the federal Safe Drinking Water Act, which applies to public water systems across the state and the country."

Democrats in the legislature are calling for an investigation into the discrepancies between state officials and the involvement of both the Governor's office and Duke Energy in the issuance of the "do drink" letters and the reversal of the health agency's original advise.

Democratic lawmakers are also pushing for the state to adopt standards for at least two of the toxins showing up in wells around Duke's coal ash ponds, including hexavalent chromium.

Republicans tell ABC11 that any investigation into who knew what and when will have to wait.

More important, according to Rep. Chuck McGrady, a Republican leader on environmental issues, is that the state legislature decide whether to allow Duke that extra 18 months to make improvements to its coal ash pits and the state environmental agency the flexibility to re-assess its plan for clean-up.